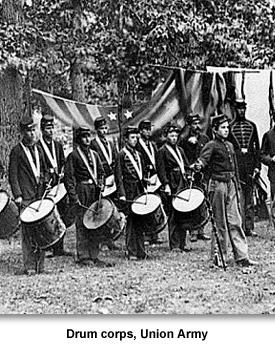 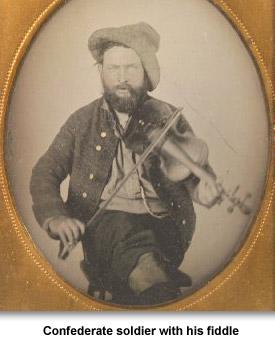 Tennesseans continued to enjoy and create music and fine arts during the Civil War.  Many of these creative pieces, of course, were about the war.

The United States government even hired artists to travel with armies and paint battle scenes, several of which occurred in Tennessee.

Singing and playing music was a popular pastime in Tennessee during the Civil War.  Each side had its favorite songs–“Dixie’s Land” for Confederate supporters and “Yankee Doodle” for Union.

Stories were written about Southern women holding their noses and humming or singing “Dixie’s Land” when passing Union soldiers.

Another popular song for soldiers was “Goober Peas.”  Goober peas is another name for peanuts.  The song lyrics are written for fun.  Since it is such a good marching song, it is listed today on the Boy Scouts of America website for scouts to sing.
Listen to a version of "Goober Peas."

One of the most inspirational songs from the Civil War times that is still played and sung today is the "Battle Hymn of the Republic.” The tune was a Methodist camp meeting song in South Carolina, and was sung in churches belonging to free blacks.  New lyrics about John Brown’s body were added after Brown’s raid on Harper’s Ferry in 1859.

Other songs reinforced the dreadfulness or war, such as “Lucilla, the Maid of Shiloh,” which reads “O’er Shiloh’s bleak and dreary hills, ...She marks her pathway with the slain.”  The lyrics of this song and others attest to the great suffering and resiliency of soldiers and their families.  These songs show the changing views many Americans developed about the ongoing war.  As the war progressed, many people became disheartened by the number of casualties and the amount of destruction the war caused.


Music Credits
The music for "Battle Hymn of the Republic," "When Johnny Comes Marching Home Again," and "Goober Peas" was provided by the Mishaw Family Singers, recorded in 2008.  Produced by Dan Justice with Mary Unobsky and Graham Perry.