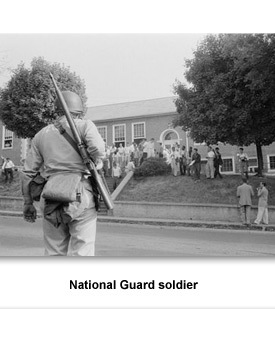 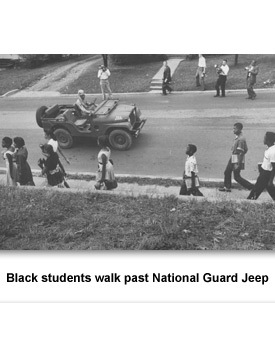 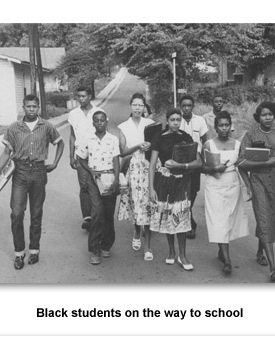 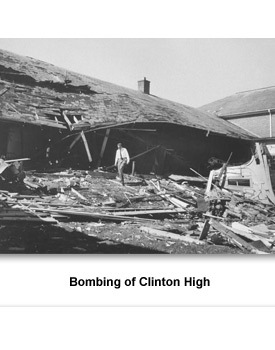 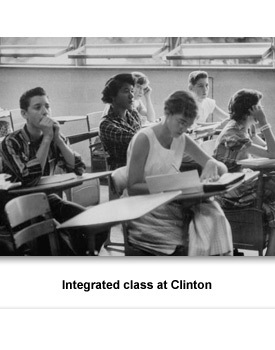 After the Brown v. Board of Education decision integrating schools, Tennessee school boards struggled with how to implement the court’s decision.

Some boards, such as Oak Ridge, integrated voluntarily. Others resisted until directly ordered to do so by the courts.
The most dramatic school desegregation occurred at Clinton High School in Anderson County. Before 1956, black high school students were bused out of the county to Knoxville since no black segregated high school existed in Anderson County.
Frustrated that their students had to take a long bus ride, local African Americans filed a lawsuit in 1950. That lawsuit was on appeal when the U.S. Supreme Court issued the Brown decision in 1954. A local judge ordered the school to accept black students by the fall of 1956. The school administrators prepared to comply.
Twelve African American students were registered without incident. But John Kasper, a vocal segregationist from Washington D.C., came to Clinton to stir up opposition to the integration. He called for rallies and pickets to protest the students attending Clinton.
On the first day of school in August 1956, the black students walked into Clinton High School. They were the first African Americans in the South to attend a previously all-white public school.

The students met at the all-black elementary school, Green McAdoo School, and walked together to the high school. There were no problems the first day, but the next day there were threats of violence.
Judge Robert Taylor issued a restraining order against Kasper forbidding him from interfering with integration. When Kasper held a meeting with 1,500 people, Taylor ordered his arrest. With Kasper in jail, Asa Carter, a white pro-segregationist from Mississippi, came to Clinton to lead the opposition. A riot broke out as whites overturned cars, smashed windows, and threatened to dynamite city buildings.
Local officials asked Governor Frank Clement for help. Clement agreed to call out the National Guard. Unlike Arkansas Governor Orval Faubus, who a year later used the Arkansas National Guard to block desegregation in Little Rock, Clement sent 100 highway patrolmen and 600 National Guard soldiers to restore order. Dig Deeper: Compare the different approaches to school desegregation by the Tennessee and Arkansas governors.
While waiting for state law enforcement officers to arrive, white Clinton citizens formed a “home guard" to try and protect their town. They even confronted the white mob.  Harold McAlduff, a member of the home guard and World War II veteran, said “I’ve flown 26 missions in the war, and I’ve never been more frightened in my life than that night in Clinton.”
The highway patrol arrived first in a long line of police cars with their lights flashing.  Greg O’Rear, the head of the highway patrol, climbed out of his patrol car, threw his shotgun over his shoulder, and said, “Boys, it’s all over.” And it was. The crowd broke up and went home.
The National Guard arrived the next day with tanks and 600 men, and stayed for two weeks. However, acts of intimidation continued after they left. Crosses were burned on the lawns of faculty members. Shots were fired into homes of two African Americans. Dynamite was thrown in the African American neighborhood. The school principal, David Brittain, sent his family away from the house after receiving bomb threats.
In December, a white Baptist minister, Paul Turner, decided to escort the black students to school. When he left them, he was attacked by several whites and severely beaten. The same day a couple of white men tried to enter the school through a back door. They were confronted by the home economics teacher, who was also the principal’s wife, and a student. Brittain closed the school for five days.
The beating and school closure shocked the community. In a local election all the White Citizen Council candidates who were opposed to desegregation were defeated. Eventually hostilities were reduced.
In 1957 Bobby Cain became the first black student in Tennessee to graduate from a desegregated public school. A year later Clinton High School was destroyed by a bomb detonated at night.  Several nationally known figures, including evangelist Billy Graham, and local citizens raised money to rebuild the school. No one was ever arrested for the bombing.
For more information about the Clinton school desegregation, click here.
Read what the 1956 Clinton black students thought about school desegregation.