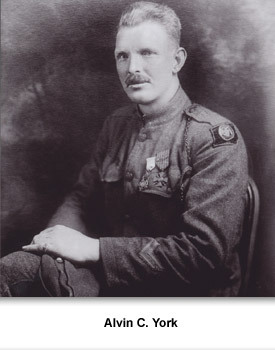 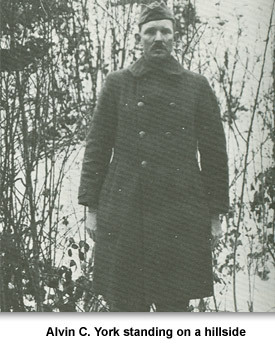 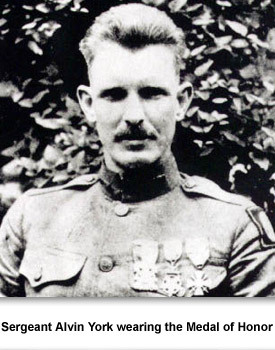 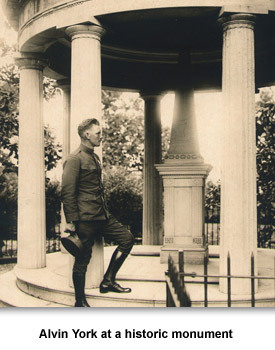 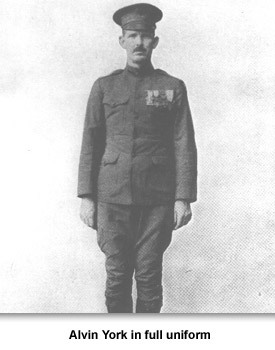 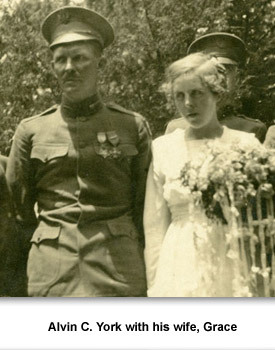 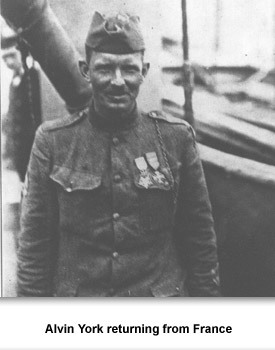 The most famous Tennessean during World War I was Alvin C. York of Pall Mall, Tennessee. A farmer, he became the most decorated soldier in the war receiving the Medal of Honor.

York was a devout Christian whose church forbade members to drink, dance, go to movies, or to read popular literature. The church also thought that violence and war were wrong. When York was drafted, he wrote “don’t want to fight” on his draft card. The draft board refused his request to be a conscientious objector .

When York received his notice to report, he said he prayed for two days about whether or not he should go. In his diary, he wrote after prayer “I received my assurance that it was all right, that I should go.”

York developed a reputation in training camp as being a good shot. He didn’t have respect for the “boys from the big cities” who would not only miss the targets, but also “miss the hills on which the targets were placed.”

York credited his shooting skills to his hunting experience at home. “I think we [men who lived in the Cumberland Mountains] had just about the best shots that ever squinted down a barrel. Daniel Boone and Davy Crockett used to shoot at these matches long ago,” he wrote.

York’s unit was sent overseas and served in the Meuse-Argonne Offensive in September/October 1918. On October 8, York’s unit was sent to take control of a hill in Chattel Chehery. The men, who couldn’t read their French language map, ended up behind enemy lines.

As the men advanced across a valley, they were pinned down by German machine gun fire on three sides. Men from four squads, including York’s, were ordered to silence the machine guns. The group of 17 men managed to capture 15 or 20 unarmed Germans who were still in camp. The German soldiers with machine guns then turned their weapons on the Americans, killing six and wounding three.

While the rest of the Americans were pinned down with the German prisoners, York started firing back. Using the sharpshooting skills he learned at home, York took on the rest of the Germans. Every time an enemy looked over the barricade, York shot him. “I don’t think I missed a shot. It was no time to miss,” he wrote.

A German officer and five soldiers jumped out of the trenches and charged York with fixed bayonets. York just kept calmly firing, shooting the nearest soldier to him and then the others. Finally a German officer pleaded with York that “if I wouldn’t kill any more of them he would make them quit firing,” York said. York agreed and the entire unit surrendered.

Using a rifle and his automatic pistol, York and the other eight Americans lined up 132 prisoners. They marched them two by two back to the American lines. One of the American officers came out amazed at the number of prisoners and asked “York, have you captured the whole German Army?”

The official history of the 82nd Division called York and his fellow solders’ actions as being “entitled to a place among the famous deeds in arms in legendary or modern warfare.” York received a Medal of Honor for his actions.

York typified the image of the patriotic yet simple American soldier, and became a hero at home. Ignoring offers from Hollywood, York shied away from his celebrity status. He, instead, pursued progressive reforms for other rural Tennesseans. He went on to promote good roads, and better employment opportunities.

In 1926 York established a school to provide educational opportunities, which he didn’t have, for boys and girls in Fentress County. This school still exists today as the Alvin C. York Institute.