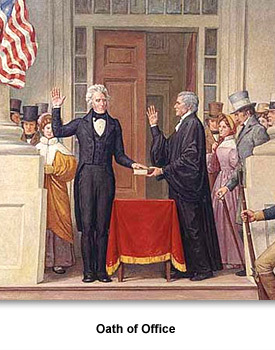 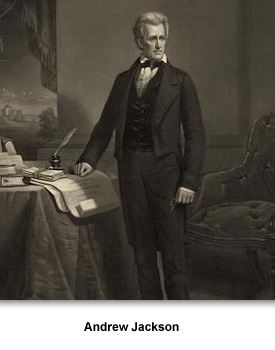 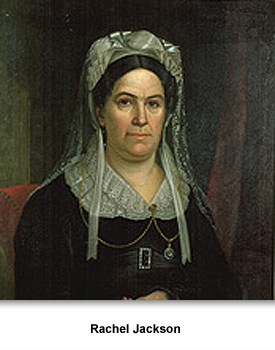 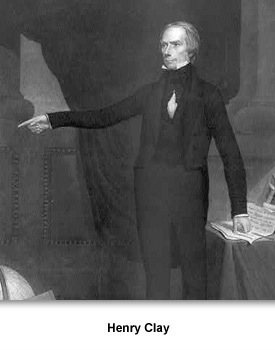 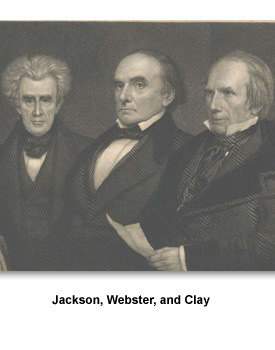 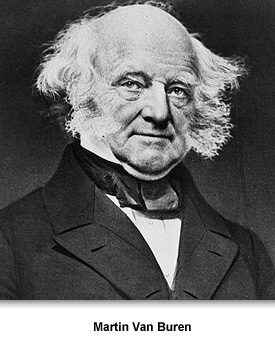 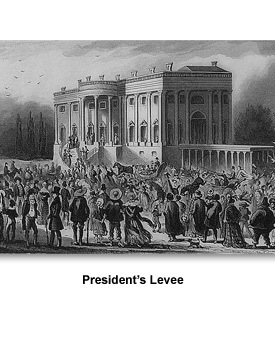 Andrew Jackson easily won the presidential election in 1828. At the height of his success, Jackson suffered a terrible personal loss. His beloved wife Rachel died at their home in Nashville, probably from a heart attack.
Jackson and Rachel had been married 38 years. From all accounts they were devoted to each other. Read part of a letter Jackson wrote to Rachel.  Jackson blamed her death on his political opponents who had criticized the unusual circumstances of their marriage.
Andrew Jackson served two terms as president. During this time he faced many challenges. He fought against efforts to use federal money to fund internal improvements like roads because he felt that they would only benefit a relatively few Americans.
Jackson put down an effort by people in South Carolina to “nullify” or refuse to follow federal laws like tariffs. He ordered armed forces to Charleston, SC, and threatened the leaders of the state. South Carolina dropped the idea.
Jackson was the first president to use the pocket veto, which means that he killed the legislation by not signing a bill and holding it until after Congress adjourned.
He pushed for American Indian tribes who lived in southeastern states like Tennessee to be removed west of the Mississippi River. At his behest, the Indian Removal Act was passed in 1830, although Indians were not removed until after Jackson left office. In general, Jackson increased the power of the office of the president in American government.
Jackson waged one of his most famous political battles against the Second Bank of the United States. At that time, the bank received revenue deposits for the government. Jackson thought the bank was unconstitutional and had too much power. He vetoed the bank’s re-charter, and moved the government’s money to other banks.
Many Americans and Tennesseans, especially those who were not rich, supported Jackson in his war against the bank. Jackson succeeded in getting rid of the bank.
Read more about Jackson and the Second Bank of the United States.
Jackson ran for a second term on his veto against the Bank of the U.S. Jackson said voters could vote against him if they disagreed with his veto. Jackson easily defeated Henry Clay with 55 percent of the popular vote and 219 to Clay's 49 electoral votes.
With Jackson you were either his enemy or his friend. When he was president, two political parties developed. Jackson’s supporters became known as the Democratic Party. His opponents, including Henry Clay and Daniel Webster, were the Whigs or the National Republicans.
When his two terms as president were over, Jackson supported Vice President Martin Van Buren from New York to be the next president. Many voters in the Democratic Party were unhappy about this. They resented Jackson using his political influence for Van Buren—they felt like he was trying to tell Democrats how to vote. For example, a majority of Tennessee voters supported Hugh Lawson White, a Tennessean who ran for president against Van Buren.
However, Van Buren won the election and became president. Andrew Jackson traveled back home to Nashville and his home, the Hermitage.
Read more about Andrew Jackson.