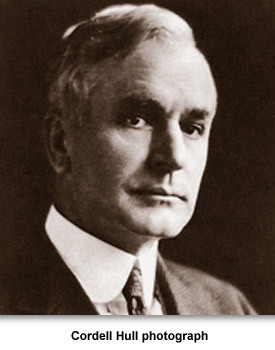 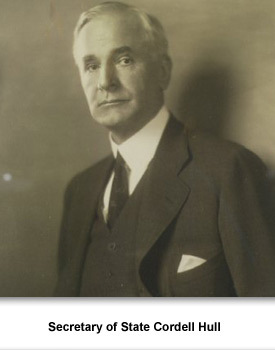 Cordell Hull and the UN

Cordell Hull rose from a humble background to prominence on the world stage.
He was born in Pickett County, Tennessee, on a farm near Byrdstown. Hull trained as a lawyer but entered politics early in his adulthood. At different times, he was elected to the Tennessee General Assembly, the U.S. House of Representatives, and the U.S. Senate.
When Franklin Roosevelt became president, he appointed Hull as U.S. Secretary of State. He served in this office from 1933 until 1944. Hull served as Secretary of State longer than any other person.
Throughout his political career, Hull was very interested in international relations and trade. At a time in American history when many people favored isolationism , Hull consistently spoke out for the value of having good relations with other countries.

He proclaimed a "good neighbor" policy for the U.S. in dealing with neighboring countries in the Western Hemisphere.
Hull witnessed the failure of the League of Nations, which had been created after World War I to help keep the peace among nations. Even before the United States entered World War II, Hull began planning for a new organization of nations. He envisioned a group dedicated to promoting world peace and economic growth.
The need for this organization became even more urgent after war began. He saw that the United States and other nations had to be ready to deal with the aftermath of war and be prepared to work for a lasting future peace.
Hull stated, “From the moment when Hitler’s invasion of Poland revealed the bankruptcy of all existing methods to preserve the peace, it became evident to us in the State Department that we must begin almost immediately to plan the creation of a new system.”
Hull led the effort to create the United Nations. As secretary of state, he organized meetings of experts, elected government officials, and representatives of other nations. His diligence and foresight helped shape this successful world organization that continues today.
For his work in creating the UN, Hull was awarded the Nobel Peace Prize. Hull said "Peace has become as essential to civilized existence as the air we breathe is to life itself."
To visit where Cordell Hull was born, go to the website for the Cordell Hull Birthplace & Museum State Park.