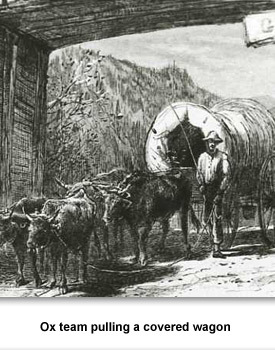 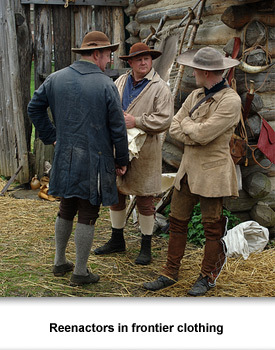 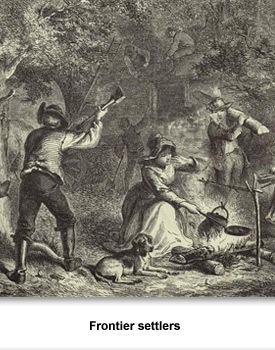 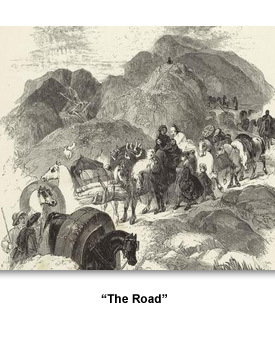 Many of the first settlers came to Tennessee using only pack animals or wagons to carry their possessions. There was only room for the important necessities—what the settler needed to start a new life.
The two most important items were firearms and seeds—firearms for protection and to shoot animals for food and seeds because seeds were not readily available to purchase. Later, stores and traveling salesmen offered seeds for sale.
Other items which might have been put in the wagon included cooking utensils, knives, extra lead and powder for their guns, plow points, and tools.
Woodworking tools were especially important for they would be needed to build a cabin. These tools generally included a froe and froe mallet for splitting shingles, an adze for squaring logs, a lathe for peeling bark and shaping wood, a plane for smoothing boards, a grinding stone for sharpening tools, wedges for splitting, and square nails for building.
After the cabin was raised, early settlers had to build their furniture. Beds might be a straw mattress supported by ropes attached to a crude bed frame. Tables were usually long narrow boards with narrow benches for seating. Dining chairs were rare; instead there might be narrow benches. It wouldn’t have been unusual for children to have to stand and eat.
Since most families farmed, tools like plows and hoes were necessary as well as animals, like oxen, used for plowing. Horses were often used for travel. A number of horse-related businesses sprung up to provide settlers with items they needed to care for their horses. For example, blacksmiths provided horse shoes.
Pigs, chickens, and other domestic animals were also kept for food or trade. Families also raised geese whose feathers could be plucked every few months and used in feather mattresses. Dogs were common as pets and also for protection.
Read about the items one Tennessean owned when he was killed by Indians in 1787.

As the frontier became more populated and settlers had more money, stores began to offer ready-made goods. Luxury items, like fine china, fashionable clothing, furniture, and even billiard tables could be purchased in Tennessee by the 1820s. Coin silver flatware, made from a 90 percent silver alloy produced from the melting down of silver coins, was purchased by many well-to-do families.

Archaeology digs in the state have un-cover-ed information about what frontier pioneers had. At Bledsoe’s Station, which was built in the early 1780s, digs uncovered imported ceramic teacups, English gunflints, and English-styled clothing pieces. By 1800, Nashville merchants were stocking everything from mahogany framed mirrors, to portable writing desks, and china.

Read about items listed for sale in a store in Rogersville in 1792.