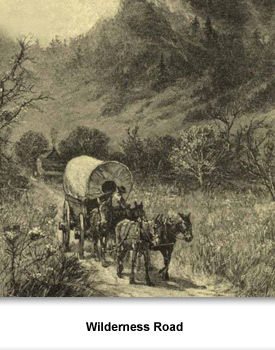 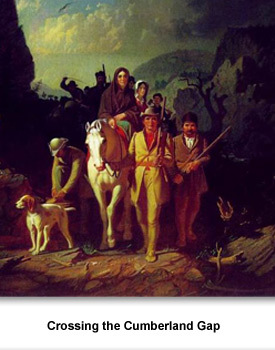 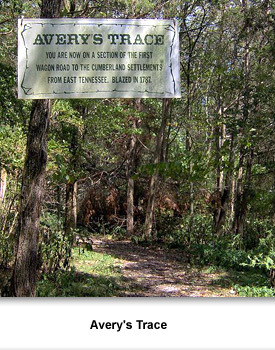 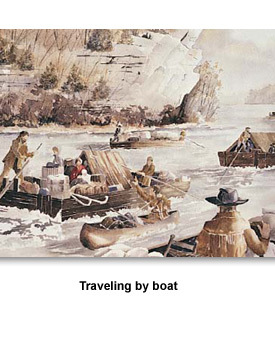 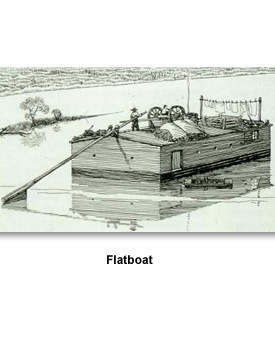 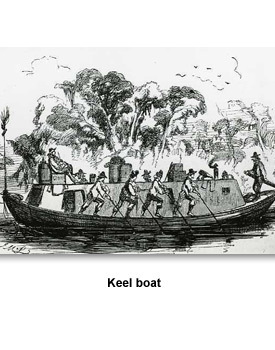 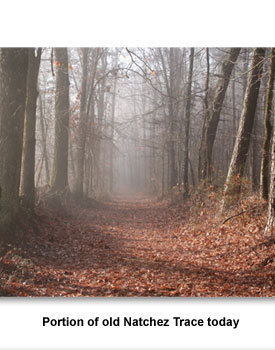 Transportation was a serious issue for settlers. Without a road system, it was sometimes difficult to move goods and people from place to place.
Early newcomers to Tennessee came by way of long-established Indian trails. A path over the Appalachian Mountains, called the Wilderness Road, had long been used by the Cherokee and Shawnee.
Daniel Boone, the most famous longhunter of this era, also used Indian trails to hunt and later to bring settlers into the frontier .  He used the Wilderness Road to cross the Cumberland Gap from Tennessee into Kentucky.

By 1778, there was another route into Tennessee--a wagon trail that ran from Burke County, North Carolina, to Jonesborough.
The Natchez Trace became an important route for trade between Mississippi and Nashville. Boatmen would float down the Mississippi River to New Orleans with cargo. At New Orleans they would sell the goods and even the boat. They then returned to Tennessee via the Natchez Trace. These men, carrying money from their sales, were often the targets of robbers on the trail.  Many people would travel in groups for protection.
In 1787, a horse path called Avery's Trace, later known as Old Walton Road, was cleared from Knoxville to Nashville. By the time Tennessee became a state in 1796, it was a road carrying more than 300 wagons a day. In 1799, the legislature approved $1,000 for improvements to this road—the first time state tax money was used for roads.
By 1821, the state had begun to classify roads and mark them with notched trees. A first class road was a “stage road” with bridges. Second class roads were 12 ft. wide with bridges, while third class roads were only wide enough for a single horse. Most roads in the state at this time were third class.
Rivers
While roads and trails played a role in the development of frontier Tennessee, rivers were even more important. West Tennessee was largely cut off from the rest of the state by land because of miles of swamp land and the Tennessee River. Roads made of cut logs called corduroy roads were built, but these were uncomfortable and expensive to maintain because the wood rotted quickly.
Rivers provided an answer to the difficulties of travel by roads and trails. Tennessee’s rivers provided an easier way to get goods to market.   Travelers on the rivers first used dugout canoes, and then flatboats.
The dugout canoe got its name because the canoe is made from a large log which was dug out in the middle. Cherokees used the dugout on rivers in East Tennessee where they lived and in Middle Tennessee where they hunted. Longhunters, traders, and then early settlers saw value in the dugout canoe and also used them.
The most common boats were flatboats. The flatboat was flat-bottomed, and floated downstream in the current.   Most were made for a trip one way down the river, since traveling upstream was difficult.  Boats were often loaded with goods, sailed down river, and broken apart for scrap or firewood once they reached their destination.
Some river men used keelboats. A keelboat could go down or up stream. They were shallow and pointed at both ends. Boatmen used long poles to help steer the boats. Some had sails.
Steamboats
In 1811, Nicholas Roosevelt took his newly built steamboat up the Mississippi and Ohio rivers, proving that the new invention could navigate these rivers. Before the steamboat, 90 percent of Mississippi River traffic was downstream only. Now boats could easily travel upstream with goods.

With this invention, river travel became easier, but not less dangerous. Steamboats often wrecked on snags or blew up when boiler pressure was too high. The life expectancy for a steamboat was no more than a few years.
These dangers did not stop frontiersmen from traveling and transporting goods by river. In effect, the river became the primary route for transportation in Tennessee. Since rivers rose and fell at different times during the year, some areas could not always be reached by river.
Because Tennessee’s rivers traveled north and south, different areas of the state were somewhat isolated.   Located on the Mississippi River, Memphis had more in common with New Orleans and St. Louis, while East Tennessee remained culturally connected with mountain communities in bordering states.
Finally, people walked as another form of transportation. It was not unusual for people to walk three to six miles a day to go to the store or to church. Not everyone had access to horses and wagons to carry them short distances.