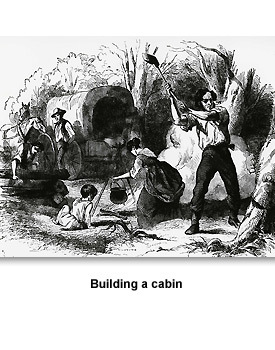 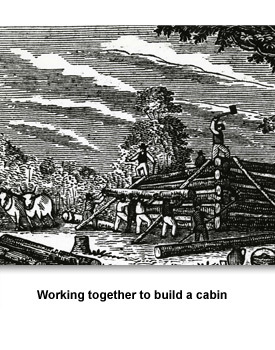 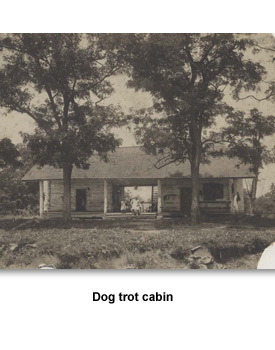 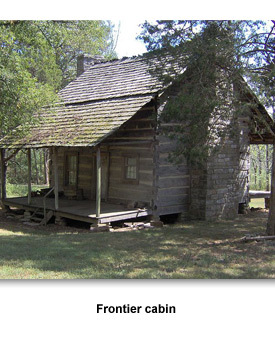 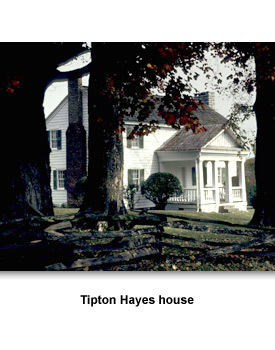 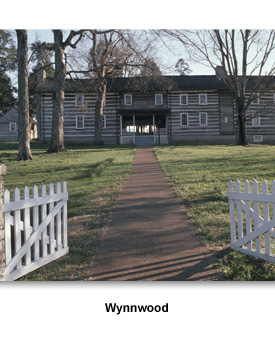 Early pioneers found rich but heavily forested lands in what is now Tennessee.
To clear their land for homes and fields, settlers chopped down most of the trees in the area where they wanted to build their homes.
Dig Deeper: How would pioneers decide where to build their homes?
They hewed logs for cabins and barns, or split them for fence rails. Trees that weren’t chopped down before planting season were killed by girding. This was done by cutting a wide strip of bark around the trunk on the tree. This weakened the tree, and eventually it would die and fall on its own.
Early settlers usually built a one-room log cabin with a fireplace, about 16 ft by 20 ft. or about the size of living rooms in today’s homes. Sometimes they had a lean-to at the side or a loft inside.
Walls were made from notched logs piled one on top of the other, connected at the corners so no nails were required. The cracks between the logs were filled with a mixture of moss, sticks, straw, mud, and clay called chinking and daubing. Usually there were no windows. Although by the 1790s, merchants in Nashville were offering glass for windows at reasonable prices, so people were adding windows to their cabins.
While many early cabins had only an earthen floor, others had a puncheon floor—logs split in half with the flat side up. The one room served as kitchen, living room, and bedroom.
As the family became more prosperous, they might add a second room connected to the first by a -cover-ed roof with a floor, commonly called a dog trot. Additional rooms would be added upward, eventually making an enclosed two-story home with the dog trot now an entrance hall with stairs to the upper level.

Often a kitchen would be built behind the house connected by an open or closed hallway, giving the house a layout like a T.  Since fires were a danger, this configuration gave people time to put out a fire in the kitchen before it engulfed the main house.  There weren't fire departments during this time.
Early settlers did not worry about landscaping around their houses—they didn’t do any. A foreign visitor to the U.S. in 1818 wrote that the houses had “a sort of slovenliness…you see bits of wood, timber, boards laying about with pigs tramping about.” Most farmhouses did not have grassy lawns or any shade trees nearby—the result of cutting down all the trees when the house was built.
Open fireplaces along with open windows and nearby dirt roads meant that frontier homes were usually dusty and dirty inside. The doors were kept open during the day in warm weather to help cool off the interior. This meant that the houses were full of flies and other flying pests. Dogs and cats usually had the run of most farmhouses.
By the 1790s, frame and brick homes were starting to replace cabins as residents of the state had more money.