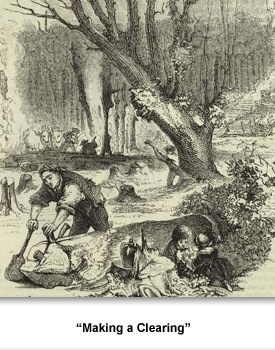 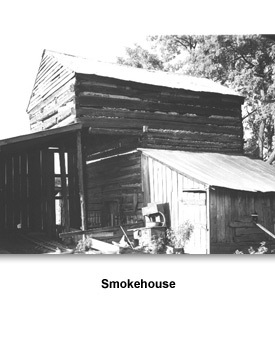 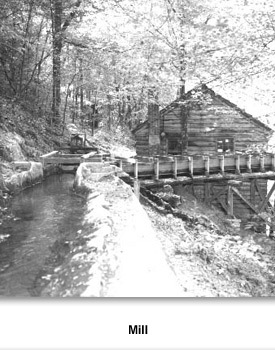 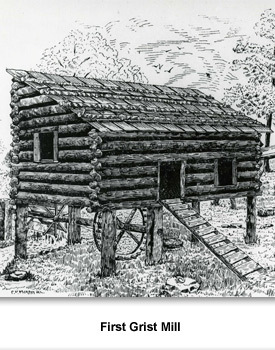 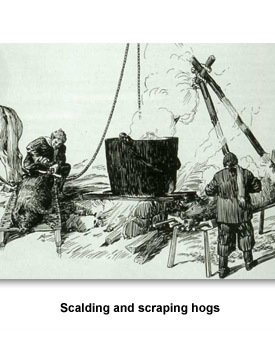 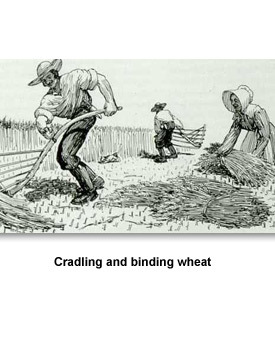 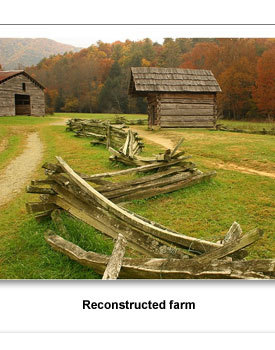 Working on the Farm

Farming was the primary work for a frontier man. It provided much of the food for his family as well as most of the raw materials needed to make clothing.
Corn was the most important crop. It provided food for the family and farm animals as well as grain for making whiskey. The corn field was usually planted close to the cabin. The reason for this was that most of the trees in this area had already been removed to be used in building the cabin so it was cleared and ready for planting corn.
Dig Deeper: How did frontier farmers plant corn?
Once a field was cleared, a farmer could turn his attention to planting crops, but that work was not easy. Some types of plows took two people (a man with a woman or a child) to control for example.
Weeding had to done with a tool called a hoe. Most crops required weeding several times during the growing season. Once the crops had matured, they had to be harvested. Without machines, this meant going into the field and hand-picking or hand-cutting the crops.
Corn and wheat had to be ground down into small particles called meal and flour before they could be used in making bread.  Most frontier families had a hand mill stone to do this, but they would take large amounts of corn or wheat to someone who ran a mill.

In Tennessee, most of these mills were run by water, with water turning a wheel that was connected to large mill stones.  Other mills were horse drawn with the horse walking around in a circle in order to turn the mill stones.
Animals (mules, horses, or oxen) used to pull plows had to be taken care of year round. They had to be fed, housed, and shoed, all of which were time consuming projects. Taking care of livestock was extremely important if settlers were to have meat and dairy products. Dairy cows had to be milked daily. This was usually a job for woman or children.
Most farmers raised pigs and cattle to provide meat for their families. These animals had to be butchered (killed)--usually a job for men. Since there were no refrigerators, a butchered animal had to be prepared for storage quickly.

Virtually every part of the animal was used, including the intestines, which was often saved to make chitterlings. The meat had to be salted and smoked in a smoke house—another building that had to be built by hand.
Cutting hay
One of the most difficult farm tasks was haying. This process involved cutting down grass and storing it in order to feed livestock in the winter when there was no grass on which they could graze.
Haying was a multiple person project with farmers often helping each other. The workers started as soon as it was light, cutting the grass while the dew was still on the grass. This made the grass easier to cut. Workers moved back and forth across the fields, swinging a long handle scythe (a blade) to cut the grass down.
They would try to finish the mowing by noon so they could begin raking, spreading, and gathering the grass together. If the hay became wet, it would rot, so if it looked like rain, farmers would work faster to try and get the hay under a -cover- or rolled up to protect it from water.  It might take 14 to 16 hours of backbreaking work in the hot sun before the workers finished.
Cotton
Growing cotton was also hard work. The cotton was planted in long rows and needed to be weeded at least four separate times.
Picking cotton was really backbreaking work. The workers wore long sacks over their shoulders. They had to bend down to each plant and pull the cotton bolls off the plants and then put them in the sacks. Even the most experienced pickers would have ripped and bleeding fingers from the sharp edges of the plant.
Smaller farmers picked their own cotton with family and neighbors while larger plantations used slaves.
Commercial farming
By the 1790s, commercial farming was becoming important in the state. Farmers had surplus crops and livestock to sell. They would take their grain to water-driven mills near settlements. Mills would process the grains so they could be sold. Farmers would then send their products over roads or on the river to markets.
Cattle became extremely important to commercial farming in East Tennessee, and were driven to market through Virginia.
Hogs too were raised to be sold commercially. By 1803, selling hogs was such a big business in the state that Tennessee might have been described as the hog capital of the nation. Horses were raised to be sold as a means of transportation. Dairy cows provided another source of income as extra milk was sold.
Whiskey was an important cash crop. Whiskey was made from corn ground at the local mill and distilled in copper pots. After the distilling process was finished, the whiskey was poured into barrels, sealed, and sent to market.
If a family lived near a river, they might be able to send their products to markets by boat. Otherwise it might be a long trip over poor roads. Men usually made these trips, leaving women behind. Since trips could take weeks, wives had to run the farm on their own, not knowing when a husband might return. For example, Richard Bean in East Tennessee left his wife alone at their homestead for several months while he was on a trading venture.