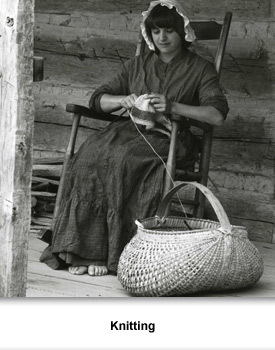 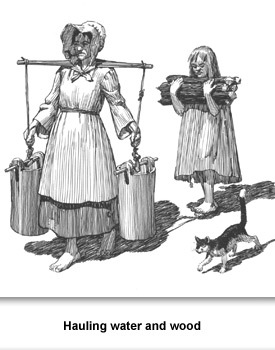 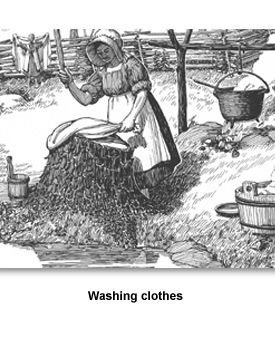 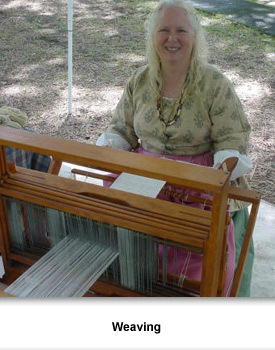 The most important job for the pioneer wife was taking care of the household.   Even though she might expect to receive help from her children or slaves, it was considered her duty to ensure that the house was in order.
This task was a large one.  The woman had to make sure that the family was properly clothed, food was prepared, the house was clean, and children were cared for, among other tasks.
.
Taking care of the home included making items for use within the home. Brooms, candles, soap, linens, bedding, and clothing were all made by hand.
Click here to read a frontier recipe for making soap.
In addition, food preparation was a slow and ongoing process. Butter had to be churned using a wooden churn, beans had to be snapped by hand, and corn might have to be ground using a log pestle and mortar.
Click here to learn how frontier women made butter.
Cooking went on all day long since several meals had to be prepared. Also, the fire, which was a source of heat and light, had to be kept going. Food had to be preserved to be saved for winter use. Peas, beans, corn, and meats were often dried for that purpose.
Some of the homemaker’s duties were parceled out to children or slaves. Even small children could sweep the floor or help snap beans. Daughters were encouraged to learn from their mothers for the purpose of someday becoming homemakers themselves.
Even sons were not exempt from domestic work. A young son might have to help with milking or clothes washing. Daniel Drake, who grew up during the frontier time, later wrote he would help with milking, but his mother didn’t want the neighbors to see since milking was “a girlish job.”
Making clothes
Another time consuming task for women was making clothes. On the early years of the frontier, it was impossible to buy ready-made clothes. Frontier women had to grow fibers, and then clean, spin, and weave them before she could even think about making clothing.
Most clothing was made from cotton and flax grown as plants or from wool cut from sheep’s coats. While men usually broke the flax fibers, women did everything else. They took the cotton, flax, and wool, and picked out all the twigs and dirt and then washed it. The fibers were then hand-carded, which involved using two paddles that looked like brushes to pull the fibers into long strands. These strands were then spun into thread.
The thread was then ready for weaving. Not every home had a loom, so many families paid or bartered for their thread to be woven by someone who owned a loom. To make cloth a weaver (both men and women were weavers) threaded her loom, making warps. When she is ready to make cloth, she uses a foot pedal to raise and lower the warps while she passes thread between them using a shuttle. A weaver’s hands and feet are constantly busy. A skilled weaver could produce about three yards of woven cloth a day.
Frontier men also tanned animal hides and skins to make leather for shoes and clothing. Skins, cleaned with the fur still attached, were also used as bed coverings.
A woman’s work must have seemed endless during the frontier period. To make matters more difficult, if her husband stayed away on business, her work load increased significantly. Even when men were home, women often had to help with plowing, clearing fields, and building.