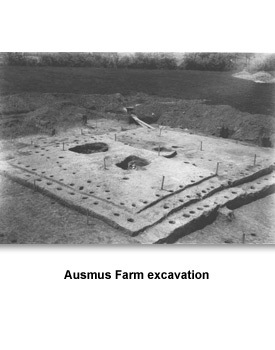 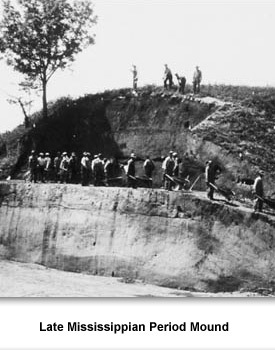 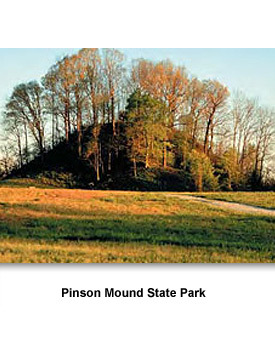 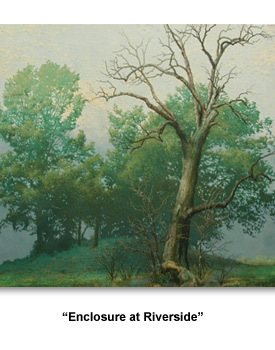 The Woodland Indians developed a new way to bury their dead. Instead of burying them in pits like the Archaic Indians, the Woodland Indians buried their dead above ground underneath large earthen mounds.
These mounds were mostly shaped like a cone or a dome. Some were very high at about 75 feet tall but most were about two to five feet high and about 30-60 feet in diameter.  Many mounds were used for multiple burials.
Often times, the burials that are inside these mounds contain the prized possessions of the person that died.   Archaeologists found many beautifully crafted jewelry, gorgets, pendants, ceremonial pipes, and medicine tubes. These artifacts tell us that the Woodland people developed burial rituals and ceremonies for their dead.
One of the largest Woodland archaeological digs is the Pinson Mounds site a few miles south of Jackson. Both burial and ceremonial mounds were constructed on this land by the Woodland Indians. Today it is a state park.
There are 34 earthen mounds at this site. One of the largest earthen mounds in the United States, now called Saul’s mound, is located here. Saul’s mound stands 75 feet tall!
Other large mounds contain burial tombs. The Twin Mounds are two mounds that are joined at the bottom. They both stand 23 ft. tall. When archaeologists dug into one of the mounds, they found six tombs. In one tomb they found eight females between the ages of 20 and 30. Each of them was wearing a headdress and copper jewelry.
The second largest mound at the Pinson site is the Ozier Mound. It is a large platform mound that is 32 ft. high. At the top of this mound there is evidence that it was used for cooking and large feasts.
One of the most interesting burials was a tomb that contained four elderly males. One of the men was buried with rattles made of human skulls with pebbles inside. The rattles were tied to the man’s knees. One can only guess what this man may have been.
The Pinson site was occupied by the Woodland Indians for about 500 years from about 50 A.D. to 550 A.D. It was primarily used as a ceremonial gathering place for Woodland Indians around the region.
Most of the mounds, including the Twin Mounds and Ozier Mound, were built between 150 A.D. to 250 A.D.  After 300 A.D. the site was occupied by local Indians who did not use it as a ceremonial center.
For more information visit Pinson Mounds State Park .


First Tennesseans >>  Learning About the Past >>  Tennessee Digs >>  Pinson Mounds