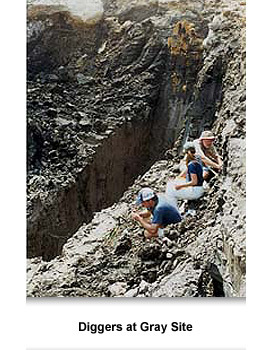 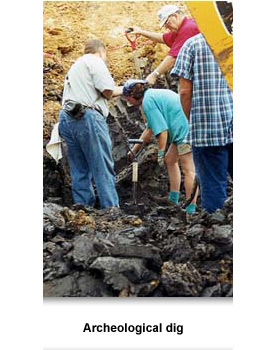 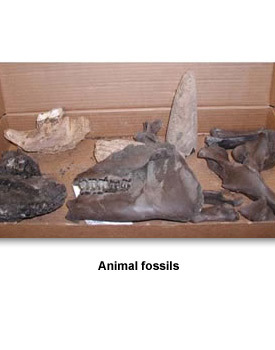 The Gray Fossil Site is a sinkhole formed from a collapsed cave. It was discovered in Washington County near Gray, Tennessee, in May of 2000.
The Tennessee Department of Transportation (TDOT) had begun a road widening and straightening project for State Route 75 just south of Gray Station.   The contractor noticed a dark soil deposit and called in TDOT geologists before continuing construction. The geologists discovered in the sinkhole a potential wealth of fossils dating before human habitation.
Limestone bedrock is very typical of Tennessee and the formation of sinkholes is quite common. The sinkholes would have acted as natural traps. The animals would have fallen in and not been able to get back out. After a while, this series of sinkholes filled with water and created a pond. More animals came into the area to visit the watering hole. The rich, organic material that filled the sinkhole helped to preserve the fossils.
The Gray Fossil Site dates to 4.5 to 7 million years old. An excavated rhinoceros skeleton was identified as being from the Miocene Epoch within the Cenozoic Era. Several other species of animals have been discovered at the site. These include saber-toothed cat, short-faced bear, ground sloth, rhino, alligator, camel, shovel-tusked elephant, Eurasian badger, red panda and the world’s largest cache of tapir fossils.
In September, 2000, Governor Don Sundquist chose to relocate State Route 75 to the north of the Gray Fossil Site. This action allows for further research to be completed at this working paleontological site. This is the largest and best preserved terrestrial Late Miocene to Early Pliocene site east of the Mississippi River. Only two percent of the site has been excavated. Scientists estimate that it will take another 200 years of digging to completely excavate this five-acre site.
For more information, click here.