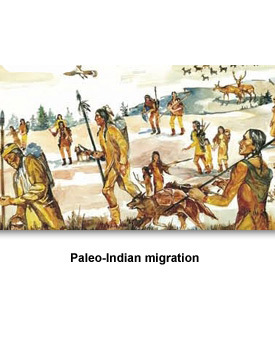 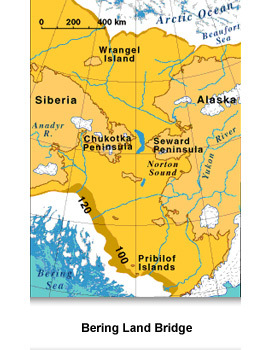 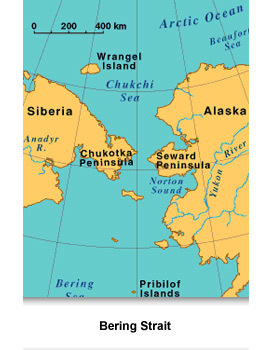 Where Did They Come From?

The first people to live in North American were not born there. Scientists think they came from Asia.
The Paleo Indians arrived in North America more than 20,000 years ago. This was during Earth’s last major ice age—a time when glaciers covered large areas of North America.
They came from Asia across the Bering Strait. Today, the Strait is covered in water, but back then, enough water was locked up into ice to leave a long stretch of dry land connecting Asia and what is today Alaska. Archaeologists call this stretch of land Beringia.
The eastern portions of Asia at that time were covered in grasslands inhabited by large grazing animals. Humans would have been drawn to the area for the opportunity to hunt these animals.
As the animals crossed Beringia into North America, bands of nomadic human hunters followed them. Beringia itself was cold and dry. It was bordered on the east by two huge sheets of ice stretching across modern Canada and well into what is today the United States.
No one is entirely certain how people spread across the continent from there, but there are two likely routes. The first was through an ice-free corridor, which was an area of clear land between the two huge sheets of glacier ice. This corridor was east of the mountain ranges in what is today western Canada.
The second possible route was along the Pacific Coast, where people would have had to avoid glacier-filled valleys. Neither route would have been appealing, as they had little vegetation or animal life.
Once the glaciers started to retreat, however, life quickly returned. There is no clear evidence as to whether people took either of these routes, but what is clear is that by 13,400 years ago, the ancient ancestors of modern Native Americans were living in North America.
For more information, try this link:


First Tennesseans >>  Who lived in Tennessee >>  Paleo-Indians >>  Where Did They Come From?