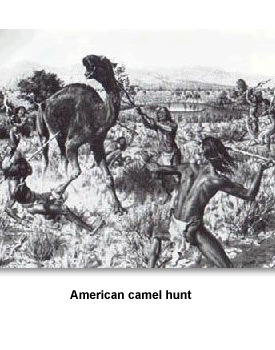 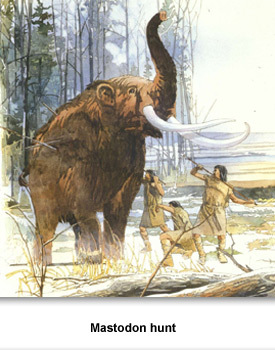 When most people think of Indian weapons, they think of the bow and arrow. The Paleo-Indian did not use bows and arrows. The bow and arrow had not been invented yet.
Instead they used spears to kill their prey. For this reason, the stone weapons they used to kill animals are not called arrowheads.   Instead archaeologists call them spear points or projectile points.
The oldest and most widely known spear point that the Paleo-Indians made was called the Clovis point. It has sharp edges and a smooth flat base. The smooth channels in the center of the point were used to attach the point to the spear shaft. This would have been a deadly weapon in the hands of a Paleo-Indian.
Clovis points were named by archaeologists after the town Clovis in New Mexico where the points were first found in 1929. Obviously we don’t know what the Paleo-Indians called them since they left no written language.
Archaeologists find Clovis and other similar spear points all over Tennessee. They do not find remains of many permanent settlements along with these points. This means that the Paleo-Indians did not stay in one place very long.
This means they were nomads, moving from place to place, probably following animals they killed for food.