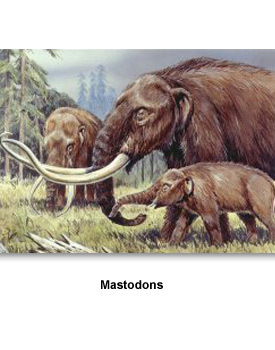 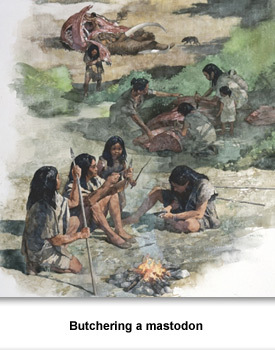 What Happened to the Mastodons?

Mastodons were large hairy animals that used to roam North America. They looked a lot like elephants do today, although they were not true elephants.
About 10 ft. high at the shoulder, mastodons had long tusks they used to break branches and uproot plants. They were hunted for food by Paleo-Indians.
Fossilized remains of mastodons have been discovered throughout Tennessee. So we know that they once lived here. So what happened to them?
The simplest answer is they became extinct, meaning that eventually all the mastodons died off. Scientists think there are two possible reasons: climate change and overhunting.
Climate change
Mastodons flourished in a cold climate. During the Ice Age, Tennessee’s hills and valleys contained giant grasslands or savannahs. Around 10,000 to 12,000 years ago, the earth began to warm up.
The ice began to melt. The grasslands and savannahs across Tennessee changed into giant forests.  Mastodons could not survive as easily in this new environment.
Overhunting
To add to the difficulty of this new environment for the mastodons, the Paleo-Indians may have overhunted the animals.
Scientists think mastodons did not have babies very often (much like modern elephants). Since the Paleo-Indians likely killed many of the mastodons, their population began to grow less and less until they finally became extinct.

The answer also might be a combination of climate change with overhunting.
Other Ice Age animals like the giant beaver, the saber-toothed tiger, and the giant ground sloth, probably met the same fate as the mastodons.


First Tennesseans >>  Who lived in Tennessee >>  Paleo-Indians >>  What Happened to the Mastodons?