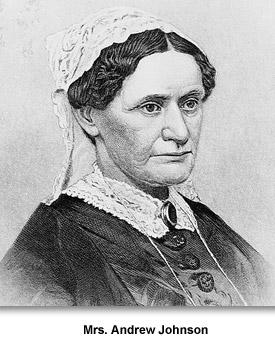 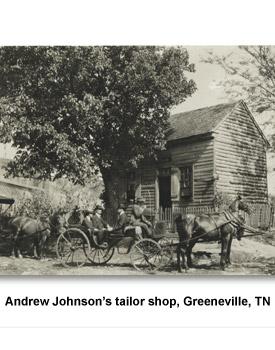 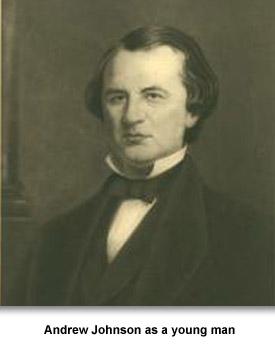 Andrew Johnson was born in North Carolina in 1808.  His family was extremely poor, so both Johnson and his brother were apprenticed at a young age to a local tailor.  Johnson, who was not able to attend school, learned to read at the tailor shop as he also learned his trade.

Apparently not happy, Johnson ran away when he was 16 years old, taking odd jobs for a couple of years before his family moved to Greeneville, Tennessee.

By 1827, Johnson had met and married Eliza McCardle, and opened his own tailor shop in Greeneville.  Eliza, who had been educated, taught Johnson to write, and in the evenings would read to him as he sewed.  This peaked Johnson’s curiosity, and he began reading books on history and literature.  He also joined the local debating society and became a good speaker.

His interest in debating led to an interest in politics as Johnson ran for local office and became an alderman at 20 years old.  He became a talented stump speaker and began to articulate his beliefs in the superiority of the common man while attacking the rich aristocracy.

Johnson began to successfully run for other elected offices, including mayor of Greeneville.  He served in the Tennessee state legislature, first as a representative and then later as a state senator.  Johnson was elected to the U.S. House of Representatives in 1843.

In his campaigns, Johnson would usually bring up his humble background as a way of connecting with voters, many who also came from poor beginnings.  He, like fellow Tennesseans Andrew Jackson and James K. Polk, championed the cause of the common man, and he even adopted Jackson’s proposal for the direct election of state senators and the president.

Johnson had a reputation for being hard working, honest, and difficult to work with.  Polk, who was Johnson’s ally, described Johnson as “vindictive and perverse.”  He wrote, “I am not aware that I have ever gave him cause for offense.”

Not withstanding his difficulty getting along with his fellow congressmen, Johnson’s political career continued to prosper.  When the state legislature changed the lines of his district making his re-election less likely, Johnson decided to run for governor and won.

After a second term as governor, Johnson decided he wanted to go back to Washington, and in 1856, he was elected one of Tennessee’s two senators.

While serving as a U.S. senator, Johnson made a speech which propelled him into national prominence and eventually into the presidency.