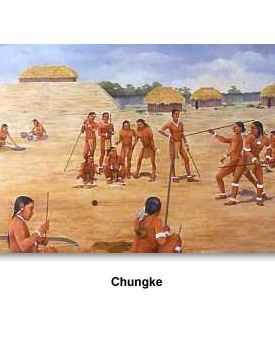 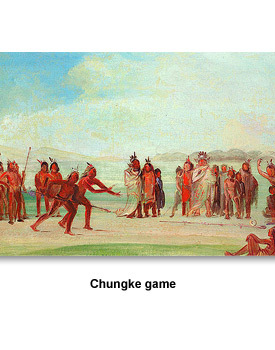 Just like people today, the Mississippian Indians enjoyed playing games. The most popular game was called Chungke.   Many early European explorers wrote about seeing the Indians playing this game from “morning to night.”
Dig Deeper: How do we know about the game of Chungke?
There are many variations to the game but the basic goal was the same—throwing your spear closest to where a stone disc rolled to a stop on the ground. The game was played with two people. These players could be from the same village or from different villages.
Each person held a long spear from 10 to 15 feet long. Another person would roll a small stone (called a Chungke stone) along a flat open piece of ground. These open areas were usually in the center of the village.
Once the stone was tossed, the two players would run a few steps and launch their spears into the air. As the stone rolled and finally came to a stop, the person whose spear came closest to the stone received a point.
Other players would watch the two and bet on who would win the game. They gambled their earrings, nose rings, gorgets , and even their clothes on this game.   Sometimes they would bet extravagantly on the outcome, even to the point of losing all their possessions.
The game of chungke varied from region to region. In one variation of the game, the players would face off each holding their long spear. As the chungke stone was rolled across the ground, one player launched his spear in an attempt to try to land it on or near the stone. The other player threw his spear at his opposing player’s spear in mid-flight trying to knock the spear out of the air. If the first player, hit the stone he received one point. If the second player knocked his opposing player’s spear out of the air, he received two points.
Chungke was a very important game to the Mississippian Indians. It often determined who held political or social powers in a chiefdom.
The Chungke Stone
Chungke stones were prized possessions. They were normally made of very hard stone and were ground to a smooth finish. Shaping chungke stones was a very long and difficult process. Therefore, these stones were passed down from generation to generation.
Often, Mississippian Indians buried valuable possessions with people that died. In most cases, however, chungke stones were not buried with people. They belonged to the village and were passed from generation to generation.