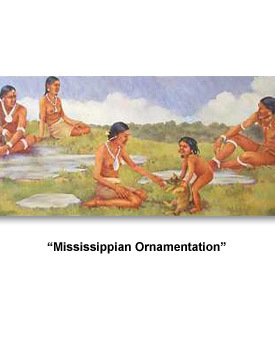 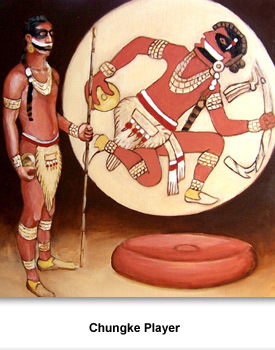 Much of what Mississippian Indians wore has been lost to time. Animal skins, fabrics, and other soft materials that they probably used to make clothing decayed long ago.
However, archaeologists have found other items that the Mississippians wore that have held up through time. These items were probably used for jewelry and ornamentation. They were made of stones, copper, bone or even shells. They give us clues about the Mississippians.
Gorgets
Mississippian Indians crafted and wore beautiful ornaments made out of shell. Some of these show remarkable engravings of patterns, humans, and animals, and were worn around the neck. Today we call them gorgets.
These shell gorgets are some of the most artistic and meaningful artifacts made by the Mississippians, and many of them have been found here in Tennessee.   They were made out of conch (pronounced conk) shells from the Atlantic or Gulf Coasts. The shells probably make it to the Tennessee area through trade.
Gorgets were made from the inside part of the shell. This interior of the shell had a shiny pink color that could easily be engraved with a sharp stone.   The gorgets are circular in shape and are about three to five inches in diameter. Normally there are two holes at the top of the gorget so that it could be attached to an animal hide cord and tied around the neck.
There are many types of gorgets found in Tennessee.
Plain Style:  This was the most basic gorget style. It had very little if any engraving. It is one of the rarest of all gorgets. It was probably made during the late Mississippian period and even into early historic times. This style has been found in Illinois, Missouri, and Tennessee.
Triskele Gorget:  These are some of the most elaborate gorgets and are found mostly in Tennessee. They have scalloped edges with a whirlpool-like design in the center of rings and circles.
Birdman Style:  Some gorgets contain human likenesses, called effigies . These give clues about what the Mississippian Indians might have worn. Other human effigies depicted half man and half bird engravings. These gorgets are called birdman effigies. Some Archaeologists think this effigy depicts a myth or god in the sky. Notice the birdman’s head is clearly seen, but his body appears to be obscured by a cloud. He also has what appears to be a lightning bolt coming from his mouth.
Engraved Mask
One of the strangest and eerie masks is the engraved mask gorget. These gorgets are made from the large outer portion of the conch shell.   A human face was carved on it to look like a mask, however, Archaeologists have dis-cover-ed these masks around the chest of some Mississippian burials. Engraved on the mask are two eyes a nose and a mouth. Can you see the face?
Spider Gorget
One of the most artistic gorgets is the spider gorget. Indian legend has it that the water spider first brought fire to man. Perhaps this is the reason they honored the water spider in jewelry.   This particular gorget is a wonderful example of the spider style that is found only in central Tennessee.
Rattlesnake Gorget
The most common effigy style is the rattlesnake gorget.   It is not known what significance the rattlesnake held for the Mississippian Indians, but they are found in many different designs. Most of the rattlesnake designs have been found in Tennessee and northern Georgia.
Shell gorgets were worn during the late Mississippian phase and into historic times. It is not know exactly what meaning they had. Perhaps they were status symbols, or designated a specific clan. What is known is that the shell gorget disappeared as Indian ornamentation sometime around the arrival of European explorers. It seems they replaced the shell gorget with medal objects made in Europe.