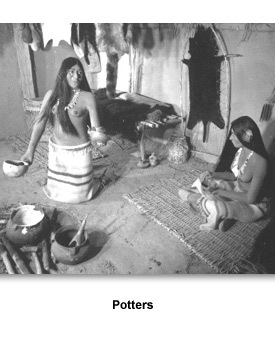 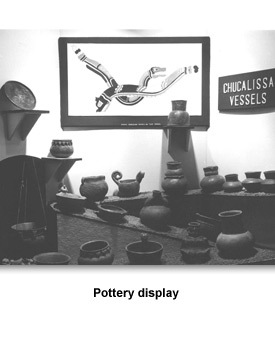 The pottery created by the Mississippian Indians is some of the finest made by any prehistoric cultural group.
Pottery had been around for thousands of years before the Mississippians but they became experts at crafting works of art through their pottery. Mississippian pottery also gives us great insight into how advanced their culture was. It even reveals what the Mississippians might have looked like.
How did they make it?
Most Archaeologists believe that women made the pottery. It was made by mixing wet clay with a tempering agent. A tempering agent was any ingredient that would make the clay harder and more durable once it was dried and baked.

Different potters chose different ingredients for tempering. Some chose crushed bone, shell, dried clay, or even hair to mix with the wet clay.
Once the clay and tempering agent were mixed together, the potter would role the clay into long coils. Then she would stack each coil on top of one another, flatten and join the coils until quite thin, and smooth the pottery out with her hands.
These pottery makers became so good at this craft that they made vessels in all kinds of shapes. This shaped pottery is called effigy pottery. Effigy just means shaped like something. In the case of the Mississippians, they shaped their effigy pottery into many different and important things they saw in nature such as animals and people.
Human effigy pottery
The pottery shaped like people are called human effigies . Pottery shaped in the form of a human reveals many things about the Mississippian culture. First and foremost, it can tell us what the Mississippians looked like.
Many human effigy pottery show distinct facial features and even show tattoos. Other human figures are more mysterious. For some reason, the Mississippians made lots of pottery in the shape of women with a hunched back. It is not known why they did this? Some believe Mississippians may have thought women with hunchbacks were sacred.
Animal effigy pottery
Many of the effigy pottery found at Mississippian sites have a variety of animal shapes. These animal effigies are in the form of bear, possums, beavers, ducks, owls, fish, and dogs.
Just like the human effigy pottery, it is not known why the Mississippians chose animals such as these to make into pottery.   Some Archaeologists feel these animals were of special importance to Mississippian family groups.
For instance, owls can see and hunt at night. They are the only animals that can kill a peregrine falcon, which is one of the fastest birds.   Frogs can live on the land or underwater. However, this is just a theory and it is not known exactly what meaning these animals held in the Mississippian culture. The one thing we do know is that the Mississippians were expert artists in making effigy pottery.