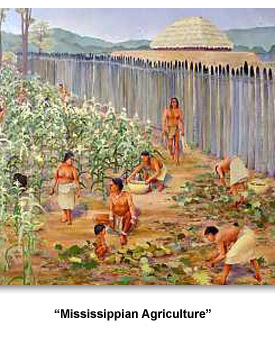 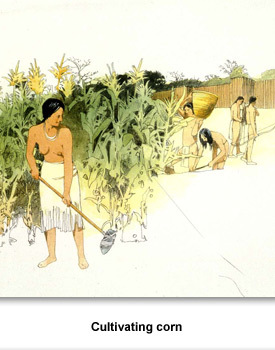 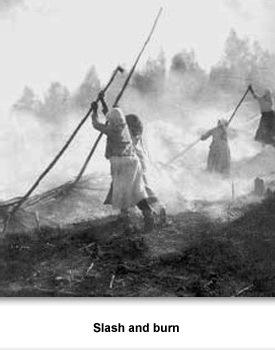 During the Mississippian Period there is a major change in farming due to the introduction of maize. From Mexico and Central America, maize cultivation spread throughout the southwest and into the southeastern areas of what are now the United States.
The maize plant became the most important agricultural crop of the Mississippian Period. The people of the Mississippian culture became fully dependent on maize agriculture within 100 years of the plant’s introduction.
Archaeologists see major changes in the Mississippian lifestyle with the introduction of maize to the region. Instead of living part of the year in river flood plains and then moving when the floods came, Mississippians started building permanent settlements just outside the flood plain.
This allowed the entire flood plain to be cleared for growing crops. The annual flood dumped sediment and fresh soil in the low land around the river, making it a perfect area for supporting the growth of large amounts of crops.
Along with maize, the Mississippians planted crops that had been grown by their ancestors. Things like squash, sunflower, marsh elder, and various gourds were grown alongside maize.
Beans became an important crop by around 1200 AD. This added an additional protein source to the Mississippian diet. Planting beans also helped the growth of the main maize crop. Bean plants naturally add nitrogen to the soil which is a very important nutrient to the maize plant.
To clear an area for their crops the Mississippian people practiced the “slash and burn” method.  In this technique, all the vegetation is cut down and allowed to dry. After a few weeks, the dry vegetation is burned and then turned into the soil. This releases nutrients to fertilize the soil.
After the area was cleared, crops were planted. Maize plants were generally planted in long rows about a foot high with footpaths between them.
Another method was to plant maize, beans, and squash together on a small hill. Maize and beans would be planted on the top and sides of the hill together. By planting this way the maize plants could act as a support for the bean plants and benefit from the nitrogen that the beans naturally added to the soil. Squash would be planted around the base of the hill.
Throughout the summer the Mississippian people would harvest green maize, as well as, gather edible wild plants, fruits, berries, and greens. The main harvest would occur in the fall and any surplus would be stored for later use. It is thought that one acre of plants would produce about 22 to 26 bushels of maize. One bushel of maize is equal to 56 pounds.
The introduction of maize agriculture to the Mississippian culture was accompanied by a large growth in population. Maize agriculture was one of the factors that allowed the people to create the most permanent settlements of any previous group and to develop a more complex culture.