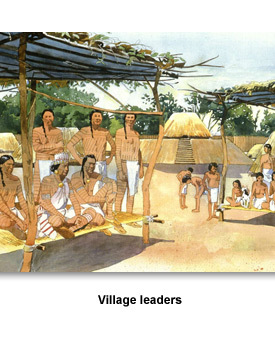 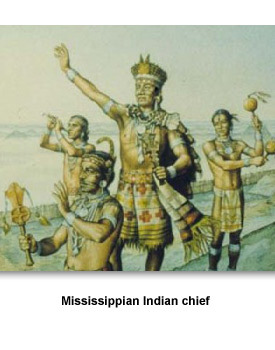 A new form of political power arose during the Mississippian period. The new structure is called a chiefdom.
Chiefdoms consisted of two social ranks: the elite and the common people. It is marked by a great deal of inequality. You were either on top or you were not.
It is thought that the chiefdom system came about for several reasons. One reason was to defend the people of the community but also to defend the areas used for hunting and agriculture. As populations increased it became very important to keep areas with fertile soils, as well as, good hunting.
Chiefdoms made possible a system of management of the environment so that food sources could be regulated and not overused. Chiefdoms brought about a system of distribution of food and resources between communities.
The elite class was usually composed of three positions: the chief, the head of the military, and the religious leader. Positions within the elite were not earned, they were inherited. Chiefdoms did not allow for individuals to rise above their status due to accomplishments.
If the common people were unhappy with their leaders, they were not able to directly change anything. They could, however, leave the community and go to another chiefdom.
The elite class governed over small farming settlements and villages from the large temple mound complex. The people of the smaller settlements paid tribute to the ruling elite. Tribute was paid in food, crafts, and labor.
The temple mound complex is where the elite would hold festivals and ceremonies for the people they ruled. These festivals and ceremonies helped to secure their power and allowed the entire chiefdom to get together to socialize, trade goods, and find spouses.
Chiefdoms were hard to rule and keep together.  They were especially fragile after the death of a chief. Chiefdoms were constantly growing and expanding then breaking apart and starting over as new smaller ones with new rulers.