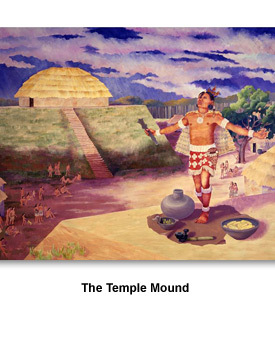 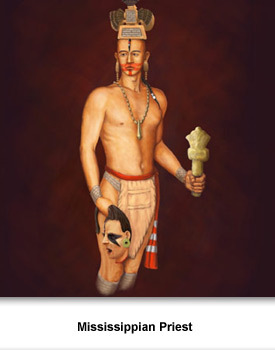 Archaeologists and scientists have learned much about Mississippian people by examining the burial customs. Burials seem to mirror the extreme differences in the social ranking of the culture. Due to the chiefdom political system, the culture was divided into two distinct social groups, the elite, and the commoner.

Members of the commoner class were often buried in or near their homes. Sometimes the community would have a cemetery where commoners would be buried.

These burials were very simple. The person was buried lying flat on their back with little or no clothes, facing east, in log or stone-lined tombs called box graves. Some burials have been found to contain pottery vessels, utensils, beads, water bottles, and rattles. These objects are usually not very ornate and do not seem to have been made especially for the burial.

Members of the elite class were often buried in box graves within mounds located in or near the large central settlement of the chiefdom. Sometimes they would be buried in cemeteries separate from the commoner cemeteries or within a special section of a larger cemetery.

Members of the elite class were buried with ornaments, symbolic weapons, and other goods that appear to have been especially made for the burial. They were often buried with engraved copper plates, copper -cover-ed ear spools, shell beads, stone statues, and fine mortuary pottery.

Archaeologists have found some burials where the elite were buried in elaborate costumes and headdresses. Some elites are surrounded by the burial sites of retainers, people who appear to have been sacrificed to be buried with the ruler.

In the Middle Tennessee area around 25,000 stone box graves have been excavated. In the southern part of Nashville, within the present day Green Hills area, almost 4,000 stone box burials were excavated by Gates P. Thruston in the late 1800s. This site is known as the Noel Cemetery. These burials contain a wealth of well-preserved artifacts due to the strength of the stone box burial method.

Thruston was a lawyer in Tennessee and had been looking for and finding old things since he was a child. Much more than just a collector, Thruston took extensive notes of all of his findings and eventually wrote a book about the ancient things he found in Tennessee.