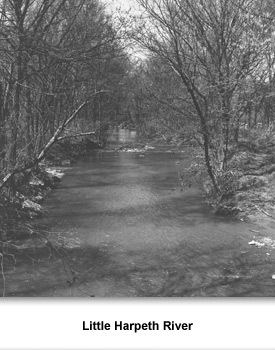 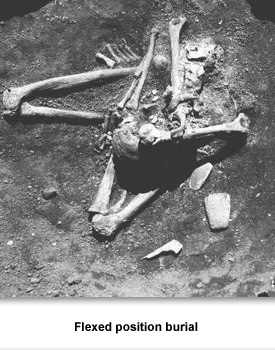 The Anderson site was a Middle Archaic settlement along the Harpeth River in Williamson County, Tennessee. It was dis-cover-ed by the grandson of the farmer who owned the land. The boy was hunting for relics on his grandfather’s farm and un-cover-ed three human burials. Local archaeologists were contacted who excavated the site.

One of the most abundant foods they ate was mollusks. They ate so many mollusks that nearly all of the land around the site was -cover-ed by mollusk shell trash heaps. The shells helped preserve all the many artifacts, including human bones.

During the excavation, archaeologist found 73 human burials, some nearly 7,000 years old. Most bodies were buried in a “flexed” position, meaning the legs and arms were pulled up close to the chest. We call this the fetal position today. Archaeologists are unsure why Middle Archaic Indians buried their dead this way.

The bones from the bodies indicate that the Anderson site people were generally healthy. The infant mortality rate was about 20 percent. This means that one out of every five babies died before their first birthday. The average life expectancy of an individual at the Anderson site was 30 to 35 years. Only 10 percent lived to be 50 years old.

Dogs as pets
A burial of a dog at the Anderson site suggests that the Indians kept dogs as pets. Dog burials have been found at other Tennessee sites including 18 at Eva and 21 at Indian Knoll. Obviously going to the trouble of burying a dog indicates that someone cared about the dog.
The dog skeleton at Anderson had several bones which had been broken and then healed. Its teeth were worn down showing it was an older dog when it died. The scientist examining these bones said the fact that the dog had lived a long life indicated that it had been well-cared for. Otherwise, he said, given the dog’s physical problems, it is doubtful that the dog would have survived so long without human care.

The Anderson site Indians made and used many artifacts made of bone and stone. Archaeologists un-cover-ed many tools including bone needles, fish hooks, and awls to make clothing, as well as stone projectile points and atlatl weights. Other artifacts reveal they had significant trade networks established. Conch shells from the Gulf Coast and copper from the Great Lakes region show that these Indians participated in a system of trade.


First Tennesseans >>  Learning About the Past >>  Tennessee Digs >>  Anderson Site