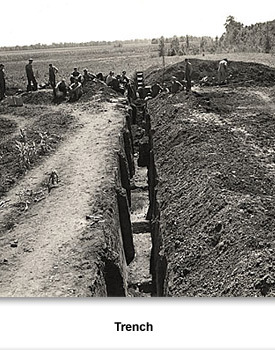 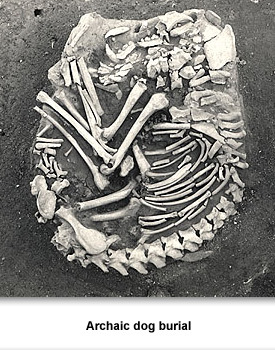 Archaic Indian sites have been found throughout Tennessee in all three grand divisions.  The largest and most well documented Archaic site is in Benton County, Tennessee, on the banks of the Tennessee River.  It is called the Eva Site.

Archaic people inhabited this site for more than five thousand years.  The first inhabitants settled here around 5,200 B.C.  It is one of the oldest known settlements in the state.

Archaeologists divide this site into three periods: the Eva, Three Mile, and Big Sandy.  The Eva period people were probably the first to settle here.

The Three Mile period represented a culture that was probably descendants of the Eva culture.  They lived on the site from about 4,000 B.C. to 1,200 B.C.

During this period the climate was much warmer and drier.  The rivers were shallow which allowed mussels and clams to become abundant.  For this reason, archaeologists believe this culture ate large amounts of mussels. Many shell mounds (discarded shells) or middens are found during this phase.

The last period at the Eva site was the Big Sandy phase. It lasted from 1,200 B.C. to about 1,000 A.D.  These people ate much less mussels and clams.  Archaeologists think this was because the climate once again changed and became colder and wetter.

The Big Sandy culture did develop many new innovations including polished and shaped stone, stone axes, and pottery.

Another very important Archaic site is located in East Tennessee.  It was named by archaeologists the Icehouse Bottom site.

Icehouse Bottom was located on the river bank of the Little Tennessee River in Monroe County near Vonore, Tennessee.  It is significant because it dates back to 7,500 B.C., making it one of the oldest known locations of human inhabitation in eastern North America.  Archaeologists believe it was a seasonal base camp for the Archaic people.

The Icehouse Bottom site revealed many important clues about the culture of the Early Archaic Indians.  For example, archaeologists found 29 clay hearths or fire pits for cooking their food.  Based on artifacts and animal bones found at the site, archaeologists believe they ate white-tailed deer, black bear, squirrel, rabbit, raccoon, hickory nuts, and acorns.

Icehouse Bottom also revealed how Early Archaic Indians buried their dead.  Archaeologists found the graves of three women that had been cremated. Cremated means to burn the body after death.  These three burials are the oldest known human burials of the Archaic Indians.


First Tennesseans >>  Learning About the Past >>  Tennessee Digs >>  Eva/Icehouse Bottom