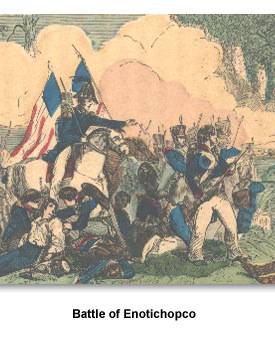 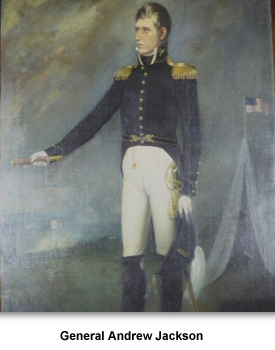 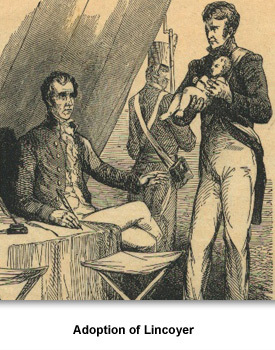 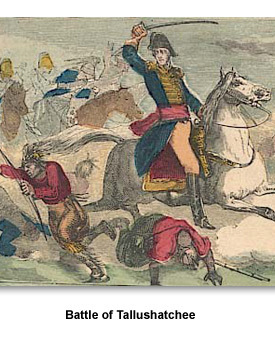 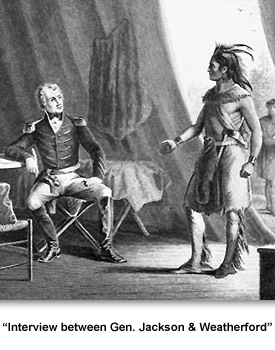 In 1813, a war between the Creek Indians spilled over to settlers. Angered at whites settling in their lands, a group of Creeks attacked a fort in Alabama and killed all 247 settlers, including children.
The attack caused panic on the Tennessee frontier. Gov. Willie Blount ordered Jackson to call out the West Tennessee militia along with Major General John Cocke’s East Tennessee militia.
Jackson ordered his troops to attack an Indian village. All the males were killed, 186 of them. Some women died, although 84 women and children were taken as prisoners.
A ten-month-old Indian child was found lying in the arms of his dead mother. When told that the child had no family left to take care of him, Jackson took care of the boy. He later sent the child to his home in Nashville. Jackson ordered that the boy, whom he named Lyncoya, was not to be treated like a servant. Both Jackson and Rachel treated him like a son, and when he died at age 17 from tuberculosis they both mourned him.
Jackson later led his troops against the Red Stick Creeks at the Battle of Horseshoe Bend. He was assisted by Cherokee scouts whom he would later force out of Tennessee with the Indian Removal Act.
More than 900 Indians were killed that day; many of them had refused to surrender after the battle was obviously lost. The battle crushed the Creeks' ability to fight back and essentially ended the war.
For more on the Battle of Horseshoe Bend, click here.
Jackson came back to Nashville a military hero. Hundreds of people crowded the streets to catch a glimpse of the general and to cheer him. He also achieved acclaim in Washington. There had been several defeats suffered by other generals. President James Madison’s administration appreciated a general who won. Jackson was made a brigadier general in the U.S. Army.