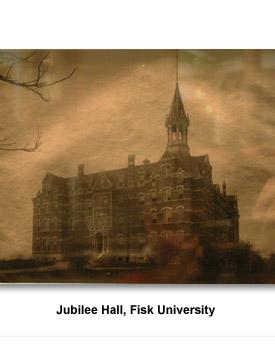 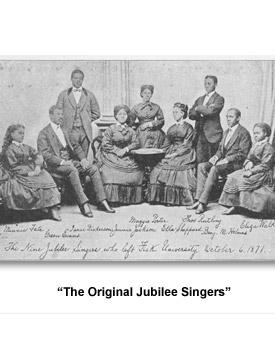 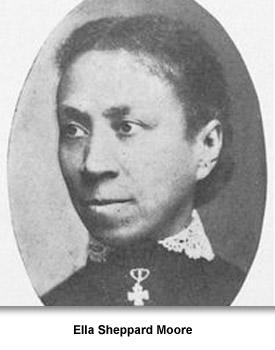 Music and the Arts

Music
Fisk Jubilee Singers
The Fisk Jubilee Singers brought the power of traditional African American spirituals to audiences in the United States and Europe. Fisk University was created in Nashville to educate former slaves.
Early in its history, the university began to focus on training students to be teachers. Many students wanted to attend Fisk. However, the college did not have enough money to construct campus buildings. The Fisk Jubilee Singers helped their school by raising money.
The group began touring in 1871. At first they visited cities in the United States. Their fame spread with their travels. Music critics wrote articles honoring their talent.
By 1872 they were singing at major events. In Boston the group performed at the World Peace Festival. They gave a concert at the White House for President Ulysses S. Grant.
The singers traveled to Europe in 1873 and earned nearly $120,000. Fisk University used this money to construct Jubilee Hall. This hall was one of the largest buildings in Nashville.
The Fisk Jubilee Singers helped to make the spiritual a popular form of music. At first the students didn’t want to sing “slave songs.” But later, due to popular demand, they started singing spirituals in their performances.

Read what Fisk Jubilee Singer Ella Shepard wrote about spirituals.
The Jubilee Singers sang for Great Britain’s Queen Victoria. Ella Shepard found the queen’s appearance surprising. She wrote: “I received the greatest disappointment in my life. The Queen wore no crown, no robes of state. She was like many English ladies I had seen in her widow’s cap and weeds [black clothes].”
She also remembered the positive response the group received when they performed in Berlin, Germany. “Our concert was received with great enthusiasm….After the concert many [people in the audience] came up and congratulated us.”