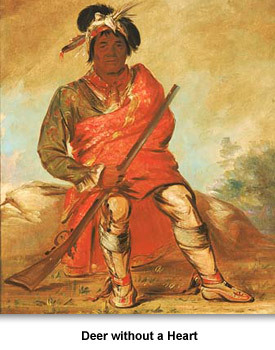 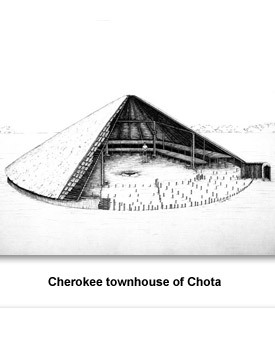 Every town had a council house. In Tennessee this was often a round building placed in a ceremonial location near a plaza.
This was a place for the Indians to meet and discuss business. Here members of the tribe would settle arguments among their members, and plan tribal activities such as planting and building new structures.
Various positions appear to have been common to all or most of the Southeastern Indians. They would have a peace, or white, chief, and a war, or red, chief. Among the Cherokees, each of these chiefs led a peace or war council.
The peace council was made up mostly of priests. They oversaw civil law and religion. The war council was made up of military leaders. They managed all decisions during times of war, but the Peace Chief always had the right to overrule the War Chief’s decisions.
Among the Chickasaws, this council house was called a mountain house.  The houses were described by European explorers as “raised with wood, and -cover-ed over with earth, and has all the appearance of a small mountain at a little distance.”
The entrance was low and the view from outside was deliberately obstructed. The furnishings in the mountain house consisted of couches or benches around the walls with seating assigned by clan and rank. Read Henry Timberlake’s description of a town house at Chota.
Once in the council house, Indians would often smoke a pipe, also called a peace pipe. Smoking a peace pipe was an important part of Cherokee negotiations. Europeans, colonists and other Indian tribes were called on to participate. It was part of the Indian beliefs mixing people, ritual and personal commitment.
Henry Timberlake said he would have rather not participated in smoking the pipe, but he was worried about offending the Indians by refusing. “I dared not even wipe the end of the pipe that came out of their mouths,” before putting the pipe in his, Timberlake wrote.
Read Henry Timberlake’s description of the peace pipe.