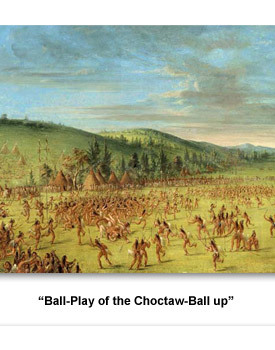 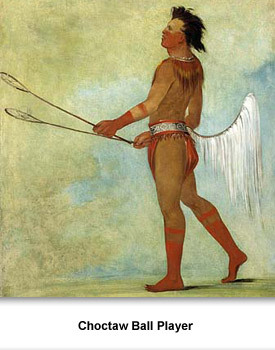 Contact with Europeans led to conflict within both the Cherokee and the Chickasaw governments.
Some welcomed the newcomers and the different culture they represented, while other Indians opposed European contact. As the 18th century progressed, new factions were forged while others disappeared.
Henry Timberlake wrote that the Cherokees often used the game of stickball to settle conflicts between towns or tribes. The game was called anetsa which means “the little brother of war.” The game involved hitting a rock with a stick. Timberlake said it was “a rough game with no protective clothing and few rules.”  It also offered young men a way to achieve a status in the tribe.
All decisions, including the decision to go to war, to make alliances, or to accept trade terms were made through the council. The losers of these debates were expected to go along with the decision of the whole. Often if there were many who disagreed with the decision, they made a decision to move away and create an independent settlement.
This is illustrated in the story of Dragging Canoe, who was a Cherokee war chief who opposed making land cessions to the English.

In 1775, a group of Cherokee leaders convinced the tribe to agree to the Treaty of Sycamore Shoals. Dragging Canoe led his band to a new settlement at Chickamauga, saying the treaty marked the beginning of the end for the Cherokee people.
For more information about Dragging Canoe, click here.


Indians & Cultural Encounters >>  Indian Life >>  Who Was in Charge >>  Dissent