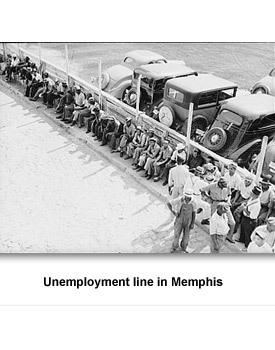 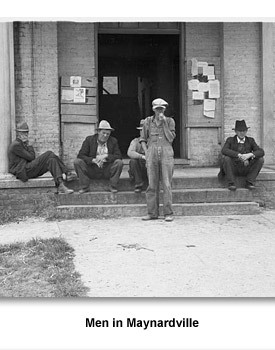 The Great Depression hit the United States with the stock market crash in 1929. By 1930, many Tennessee businesses felt the effects of this economic disaster.
Many factories reduced their employees to part-time schedules. Then increasing numbers of businesses closed. When a business closed, all the people who worked there lost their jobs. And it was difficult to find another job.
During June 1932, in Memphis a cottonseed oil mill, an automobile body plant, a wheel factory, a concrete pipe plant, a plywood factory, two chemical and oil plants, and a hardwood flooring plant closed. By 1932, more than 17,000 people in Memphis had lost their jobs.
Follow how people deciding not to buy new items affects businesses and other workers.
As businesses closed and people lost their homes, city and county governments were affected. Like today, property taxes went to pay the costs of government including schools. Because there were less business owners and homeowners paying property taxes, local governments had to lay off employees also.
People who worked as tenant farmers and sharecroppers also were affected by the economic problems. These are farmers who work other people’s land, raising crops for them. When crops didn’t sell well, the land owners would lay off their tenants and sharecroppers. This usually meant the tenants and sharecroppers not only lost their jobs, but they also lost their homes since they were living on the land they worked.
Unemployment affected the lives of many in Tennessee. However, African Americans had especially difficult experiences with unemployment.
In this segregated time, many African Americans could only get the least paying jobs like working as domestic servants. When it became very difficult to find any job, whites became willing to take these jobs, pushing many African Americans out of work.

In Knoxville during the 1920s, most of the people who had jobs paving streets were African American. By the middle of the 1930s, most of these jobs were held by whites.
Problems trying to find work continued for most of the 1930s. In 1937 there were 116,810 Tennesseans registered with the government as looking for work and unable to find it.