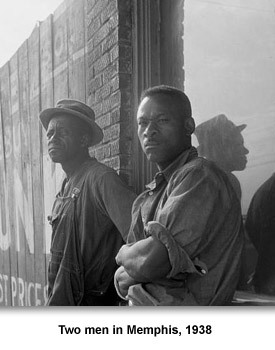 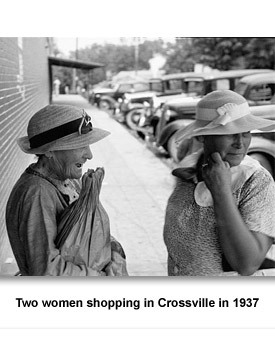 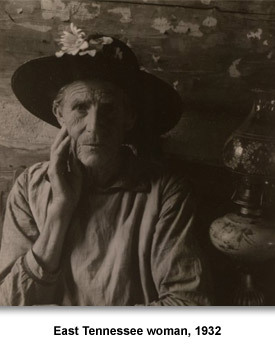 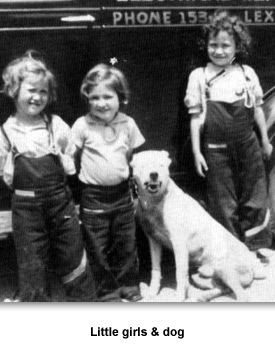 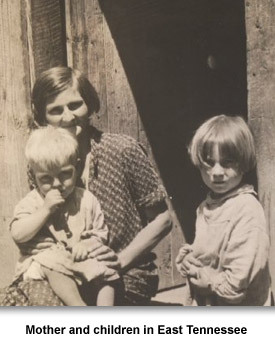 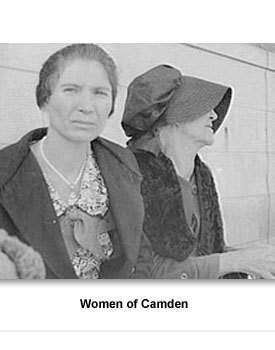 Food
When we lived in town, we couldn’t afford to buy milk. And I remember Mama would buy a quart of milk once a day and divide it between five children, six children. And Mama didn’t get any. She’d say, ‘Now put you some bread in it and make it go a little further….’
Evelyn Petree Lewellyn
Country Women Cope with Hard Times by Melissa Walker
We lived in the country, and we didn’t know there was a Depression going on. I can remember my mother looking out the window and saying, “Oh here comes your aunt and uncle, and I don’t have anything fixed to put on the table.” But somehow, when we sat down to dinner, there would be cooked chicken, mashed potatoes, whatever vegetables were in, bread and some sort of pie.
Alice Baker Fox, Hickman County
Money
You can’t live the commonest way on six bits a day. Not alone nor no way. A man like me can’t get no foothold. It’s a mighty tough hoe. The people here in the morning are hungry, raggedy, but they don’t make no hungry march.
Unidentified Memphis black man
Quoted in 1938 by Dorothea Lange
People had chickens, but no money. The general store would take eggs in trade. For two eggs you could get a tablet and pencil.
Lois Hall, Monroe County
Quoted in Soft +Cover+s for Hard Times by Merikay Waldvogel
Tommy sold his guitar to buy our marriage license. Marriage licenses cost five dollars. We lived in one room….with a cookstove and a bed. And we had a very small table a cabinet on the wall to put what few dishes we had in. And Granny gave me a big old trunk to put our clothes in. And that’s what we had in that one room.
Mary Evelyn Russell Lane (1934)
Country Women Cope with Hard Times by Melissa Walker
The first place I worked was Easy Way Dime Store. I made ten cents an hour. I’d work after school and during Christmas when I got sixteen. I went from Easy Way to Miller’s. I could go to school half a day and go to work half a day.
I’d make twenty-five cents an hour then. Bought my high school ring, which was $6.72. And I couldn’t go to the prom. I didn’t have the money for a dress or knew how to dance.
Evelyn Petree Lewellyn
Country Women Cope with Hard Times by Melissa Walker

We picked blackberries and sold them ten cents a gallon to buy books for the kids for school. Ole was working for the plant, and he was making fifteen dollars a week. Can you imagine that? So he [also] worked on the farm for a neighbor up there and he got a dollar a day. That was the wages.
French Carpenter Clark
Country Women Cope with Hard Times by Melissa Walker
Clothing
Everybody got the colored chicken feed sacks....Lands, we all had dresses and aprons, and children had play clothes [made from feed sacks]. A lot of kids wore sack dresses to school…I made bedspreads for the children’s room upstairs with them. They were just real pretty.
Mary Evelyn Russell Lane
Country Women Cope with Hard Times by Melissa Walker
Oh yeah, Daddy used to fix our old shoes.  And lots of times the soles would be out of my shoes, and he’d put cardboard in our shoes....Till that cardboard would wear out, and then he’d put a new piece of cardboard in it....Sometimes we wore our shoes with holes in the bottom of them.
Evelyn Petree Lewellyn
Country Women Cope with Hard Times by Melissa Walker
We lived in the country and raised or killed everything we ate. Mother made all our dresses we wore. I didn’t have a store bought dress until I started working and bought one myself. I can remember a neighbor saying how Florence (my mother) could sew circles around her.
Beatrice Baker Maples
Hickman County
I had (only) one dress that I wore to school. And I’d wash it and wear it again the next day….It was white background with little black print in it with red binding on it. We wore tennis shoes in the summertime. And old brogans in the wintertime with long cotton stockings. And if it was real cold, we wore overalls to school. You know, though, we all grew up together like that; one person didn’t have more than the other. You didn’t feel better than somebody else.
Wilma Cope Williamson
Country Women Cope with Hard Times by Melissa Walker
Riding the Rail
It was the Depression; there was no work. I was a burden to Mother and Gus, my step-father. I returned home and told Mother I was leaving. She didn't fight it, but she was sad. Mother owned no suitcase or tote. All she had was a black satin bag, the size of a pillow case.
I jammed my new sleeping bag inside it, three or four pairs of socks, shorts, an old sweater, the cigarettes and sacks of Golden Grain. Mother made two sandwiches. She went to her purse and gave me all the money she had: 72 cents.
I gave Mother a big kiss and a long, tight hug. She said nothing, but the tears streamed down her face...I crossed the tracks, climbed the fence and started up the hill to the highway. I turned around at the top. The tears came then, and one sob. The second one I swallowed.
Leslie E. Paul, Duluth, Michigan
American Experience, PBS
Letter to Mrs. Roosevelt from the Anderson County School Supervisor asking for help for the poor children in his district.