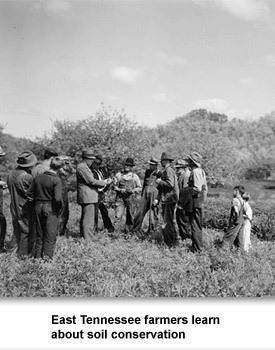 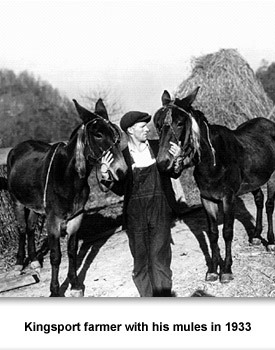 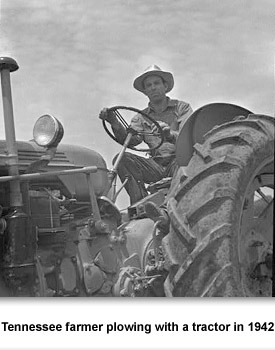 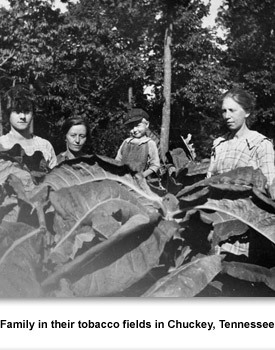 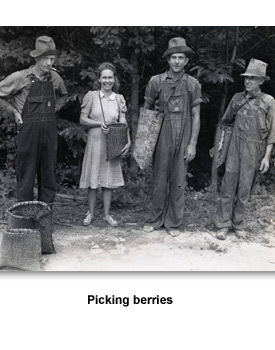 Farmers faced many challenges during the
Great Depression in Tennessee.  Farm prices had fallen in the 1920s and went even lower in the early 1930s.

Farm production didn’t always match the demand in the markets.  For example, a farmer might plant a field of sweet potatoes one year, because sweet potatoes were selling well.  But when the potatoes were ripe and he took his crop to market, he might dis-cover- that a lot of other farmers had planted sweet potatoes and he couldn’t get a good price for his.

To try and support their families, farmers produced more and more crops during the Depression.  However the prices they received for their crops decreased.

Some farmers lost their land because they were unable to pay their mortgages.  Tenant farmers and sharecroppers, who did not own the land they farmed, sank further and further into debt.

Farm Relief
President Franklin Roosevelt in a Fireside Chat in 1933 proposed a Farm Relief Bill.  This bill, he said, would bring increased monies to farmers, while preventing over-production.

Congress passed the Farm Relief Bill and a series of other laws designed to help farmers.  They provided a program for farmers to limit production of certain crops in order to increase the prices for these goods.  Farmers could also get help with their mortgages from the federal government.

Many Tennessee farmers strongly supported the federal government’s efforts to control the amount of crops produced in order to increase prices.  The Tennessee Farm Bureau (an organization of farmers) asked its members to “let Congressmen know that selfish traders and middlemen’s interest must not defeat this promising New Deal for agriculture.”

The system for regulating crop production was organized on the county level and included opportunity for farmer input.  Farmers would sign contracts limiting how many acres they planted of certain crops and in return, they would receive payments from the federal government for unplanted land.

This system appeared to work quite well.  Prices did rise in response to production control.  When the Supreme Court declared the act that governed this program unconstitutional, many farmers were outraged and demanded a replacement system of crop controls.  The federal government crafted a different system based on land conservation that served the same purpose.

Another aspect of agriculture assistance was the federal rural resettlement program.  One of the most famous examples of this kind of project happened in Tennessee, the Cumberland Homesteads.

This federally constructed community was located close to Crossville.  It was designed as a place where farm families who worked poor land could move and have a more prosperous life.  Although each family received a section of land, the community was designed to function as a cooperative, including both agriculture and some industrial production.  Eventually the cooperative ventures failed.  Many families, finding the soil too poor to raise crops, moved away.