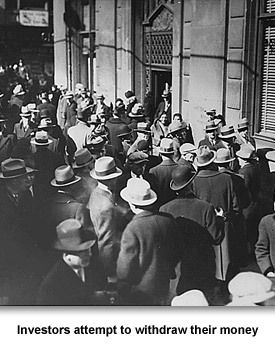 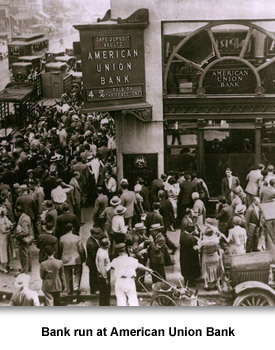 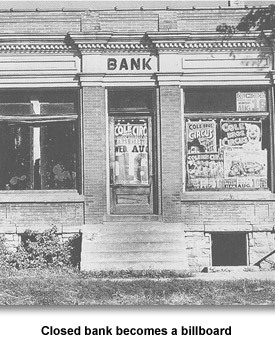 One of the problems during the Great Depression was the collapse of banks.  Unlike today, deposits in banks were not insured.  If a person had a bank account, and the bank went bankrupt , that person would lose all his money.

Throughout the state between 1929 and 1934, about 100 banks went bankrupt.  Tennessean Wilma Cope Williamson remembered “when the banks failed, Grandpa and Granny lost every cent they had in the bank.  Every penny.  They never had anything to do with banks anymore.”

Memphis was not as affected as much as other Tennessee cities.  When there was a bank run on Union Planters Bank in Memphis, William Crump, known as Boss Crump, intervened to stop it.  Dig Deeper:  What is a bank run?

Boss Crump told bank employees to put money on the counters so the customers could see that there was plenty of cash.  He then talked to the people waiting in line and tried to persuade them to leave their money in the bank.  It worked.  Union Planters Bank didn’t fail.

One of the first priorities in Roosevelt’s New Deal was to stabilize the American banking system.  President Roosevelt and state leaders like Governor Hill McAlister ordered “bank holidays”—days when all banks were supposed to stay closed.  This kept individuals from making a run on the bank.

The federal government created the Reconstruction Finance Corporation that helped stabilize banks.  New laws regulating banks were passed.  Only banks that could show they had enough money to operate successfully were allowed to resume business.

The federal 1933 Banking Act provided bank customers with insurance for their deposits.  This insurance kept people from losing all their money if their bank went bankrupt.

Many people in Tennessee and throughout the nation lost their jobs and did not have the money for their home mortgage payments.  If a person could not pay her or his mortgage payments, the bank would foreclose, or take ownership, of the person’s house.  To stop people from losing their homes, the president and U.S. Congress passed the Home Owners Loan Corporation Act.

This corporation helped people refinance their homes, and several offices for this agency opened  throughout Tennessee.  When the Memphis office opened for the first day, hundreds of people were waiting to make loans, and they used all 559 blank applications by noon.  Similar accounts were given by the Knoxville and Chattanooga offices.  This agency is credited with saving almost 14,000 homes in Tennessee.