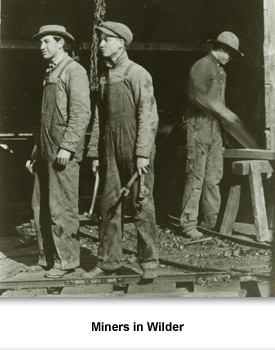 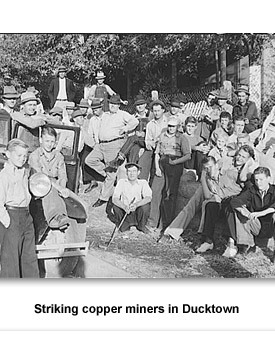 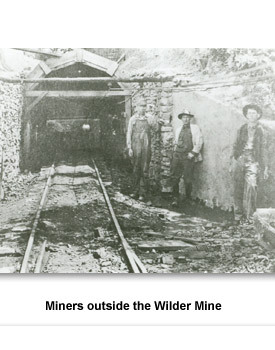 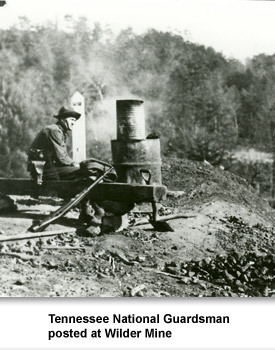 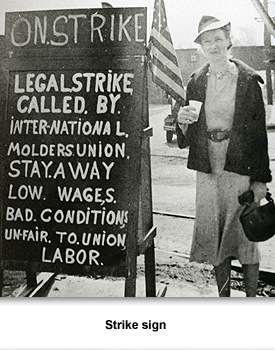 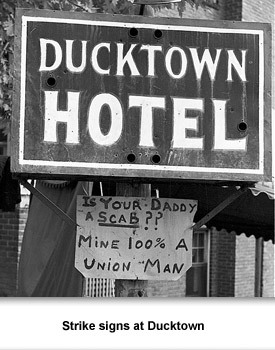 President Franklin Roosevelt’s New Deal laws supported the growth of unions for workers throughout the nation. unions were groups of workers who joined together to negotiate with employers on issues such as pay and working conditions.
Prior to the 1930s, there were not very many workers in Tennessee or the South who belonged to unions. Many employers were very hostile to unions. For example, the Washington Manufacturing Company  closed and sold its Nashville plants rather than allow their workers to unionize.  Read about union organizers in Memphis.
The New Deal did encourage Tennessee workers to join unions.  It increased the number of local unions  and union membership. The federal government did make some attempts to protect workers’ right. However, many Tennessee employers resisted having union workers.
Coal, unions & violence
Sometimes disputes between union workers and companies turned violent. In 1932 workers with the United Mine Workers Union went out on strike against the Fentress Coal and Coke Company in Wilder, Tennessee.
Wilder, located in Fentress County, was a company town. It had been built for the mine workers. Stores were all company owned and took the scrip that mine workers were sometimes paid. The company also built an elementary and high school, both of which were funded by the state.
The Great Depression was hard for coal companies and miners. The companies, which were earning less money, cut wages and cut back on work days. Miners used to working five days a week now worked three days and at less pay.
In July 1932, when Fentress Coal and Coke cut wages for the third time, and fired some union members, the United Mine Workers Union began a strike. The company brought in workers from other areas of the state to work the mines. They were called scabs or strikebreakers by the striking miners.
Violence broke out in Wilder. An expensive coal sorting machine went up in flames. A railroad bridge was destroyed by dynamite. Both union and non-union workers were shot at and some were wounded. Tennessee Governor Henry Horton called in the National Guard to restore peace in the city.
Myles Horton heard about the miner’s strike in Wilder and went there to help. He was appalled at the starving people he found there.  Horton wrote letters and gave speeches asking for donations of clothing and food for the miners and their families.  Read James Still’s account of taking donated clothing to Wilder.
Barney Graham's murder
On April 29, 1933, the leader of the striking miners, Barney Graham, was shot and killed by two mine guards. The two guards, who had shot the unarmed Graham ten times and beaten him in the head, were acquitted by a jury on the grounds of self defense. Graham’s death ended the Wilder strike. The strikers lost heart after Graham's death.  The mine resumed, and most of the strikers left the area. Read and hear the poem Graham’s teenage daughter wrote about her father’s death.


Ducktown/Copperhill strike
In 1938 copper miners went on strike in Ducktown and Copperhill.  Members of the CIO (Congress of Industrial Organizations) union, the miners wanted better working conditions.  Many were sick with what they called "miners tuberculosis," probably silicosis.  Lucy Mason, an organizer with the CIO, wrote about the “thin, yellow faces and sunken chests of men whose lives were eaten away each day they worked.”
During one visit to Copperhill, Mason said her local driver, Jim Anderson, a member of the CIO, carried a gun with him, because “someone might want to get me.” The CIO lost the strike in Copperhill.
Learn More: To learn about the young women who led a major strike in Elizabethton, TN, click here
Learn More: To learn more about a textile mill strike in Harriman, TN that tested the limits of the New Deal’s labor policies, click here.