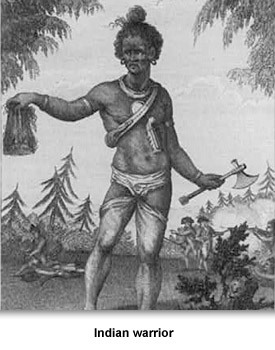 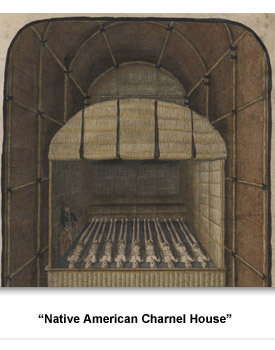 European contact with the American hemisphere had a profound impact on those people already living here. European explorers brought germs and diseases for which the American Indians had no immunity.
They also brought guns that were more effective in killing. These two developments resulted in the deaths of an estimated 90 percent of Indians between 1492 and the 1800.
While warfare took its toll, disease killed more people.  Nearly all contact with Europeans carried the threat of infection with measles, mumps, yellow fever, malaria, typhus, and most deadly of all, smallpox.  With no natural resistance to these diseases, Indians often died of the infection. These diseases were even spread ahead of European contact by Indian traders and refugees from infected villages.
Deer skin trade
The English deer trade began in the late 1600s.  By the early 1700s more than 50,000 deer skins a year were exported from the harbor at Charleston, South Carolina. English traders paid well for skins. Indians spent more time hunting and relied less and less on hunting rituals. They were able to accumulate wealth in new ways. This gave them more power within tribal councils.
As Indians grew more dependent on trade, they became more involved in colonial affairs and also more vulnerable to the demands of colonial governments. The ability to speak and read European languages became a prized skill among Indians.
This allowed them to negotiate and understand the treaties offered by Europeans and later the colonists.  European concepts of government required that leaders make their agreements binding on all tribal members—in other words, that power be centralized and consolidated at the tribal rather than the village level.
Yet, Indians maintained their independence and their identities throughout this process. The clan system continued to organize social relations. Indian women continued to have more freedom and power than white women. Christianity did not replace native religious beliefs and practices until well into the 1800s.
Indian leaders became skilled at playing the two major colonial interests (the French and the English) against one another. They negotiated the best trade and treaty terms possible, and frustrated European efforts to exert control over the Tennessee region.  It wasn’t until the late 1700s that Indians in Tennessee began to loss control over their land and their lives.