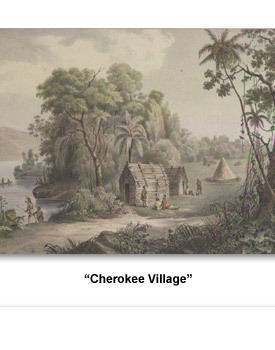 Indians had lived in Tennessee for thousands of years before Europeans arrived. Indians lived here, raised their children, farmed the land, hunted animals, worshipped, played, fought battles, and devised a system of governance.
By the 1600s, when Europeans began to keep records of their contact with Indians, there were members of the Cherokee, Chickasaw, and Shawnee tribes living here. Historians estimate that there were maybe 80 towns with perhaps 20,000 people scattered throughout.
The most prominent group was the Cherokee. Cherokees in Tennessee mostly lived in the Overhill towns located along the Little Tennessee, Tellico, and Hiwassee rivers in what is now East Tennessee. These towns included Chilhowee, Chota, Tallassee, Tannassee (from which the state got its name), and Toqua.
Even with the different tribes, one 18th century trader said all the tribes were remarkably the same “in essentials.” They all tended to build their homes on high banks or hills next to rivers, and planted their crops in the bottom lands next to the rivers. These areas were often flooded allowing nutrients to be deposited back on the land.
Each tribe was divided into clans made up of people who believed they were descended from the same ancestor. The Cherokees had seven clans including the Deer, Wolf, and Bird clans. Each member of a clan regarded another clan member as a relative even though they might be complete strangers from different towns.

Clan members had to marry outside the clan, and the children belonged to the clan of their mother (with the exception of the Shawnee). This meant a child’s closest male relation was not his/her father, but rather his mother’s brother.
In most tribes, men were the leaders, both political and religious. However the Cherokee allowed women to participate in leadership roles. The Cherokee council house was the center of town. The one at Chota was so large that 500 people could sit inside. Whenever there were serious matters to discuss, the people—men, women, and children—would gather in the council house. Because all decisions had to be unanimous, discussions might go on for days.