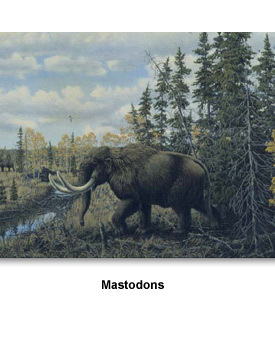 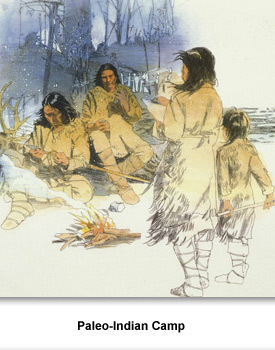 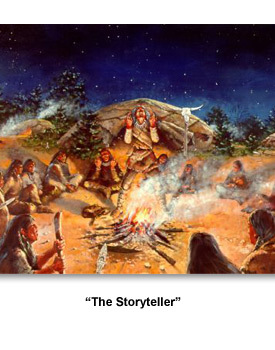 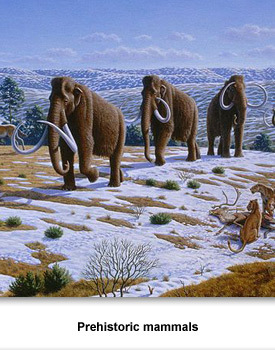 Who were the First Tennesseans?
The very first people to move into what would become Tennessee arrived here more than 12,000 years ago.
Not much is known about these early people. Most of what they left behind, that have been found by modern archaeologists , are stone weapons and tools.
Scientists call these people the Paleo-Indians.  The Paleo-Indians were nomads. This means they did not have a permanent home. Instead, they traveled from place to place hunting animals.

They probably hunted herds of mastodon and other late Ice Age animals that once lived in Tennessee.  At a dig in Williamson County, two mastodon skeletons were found.  One had a bone with marks that had obviously been made by a sharp object wielded by a human.

Paleo-Indians probably lived in groups of related family members who hunted together.  Archaeologists assume that they built shelters and dressed warmly for the weather, but we don't have any evidence yet to show that.

What was the land like?
The area that is now Tennessee was a much different place back then. The geologic time period for the Paleo-Indians is called the Pleistocene Epoch.
During this time period Tennessee was a much colder place. The climate was closer to that of northern Minnesota or southern Canada today. Snow -cover-ed the ground all winter long.
Because of the environment, different animals walked the hills, valleys, and mountains of our state. Animals such as the mastodon, giant armadillo, giant beaver, saber-toothed tiger, jaguar, and the giant ground sloth all lived in Tennessee.
Of course, these animals are now all extinct, but traces of their existence have been left behind. Archaeologists continue to find the fossilized bones of these animals in Tennessee.
It wasn’t a completely different world. If you traveled back in time you would recognize the Smoky Mountains, Cumberland Plateau, Cumberland River, Tennessee River, and Mississippi River.
You may also have noticed familiar animals. Deer, rabbits, turkeys, ducks, and coyotes also lived during this time. Some animals, like the arctic shrew, still around today living in colder environments, once lived in our cold and snowy state.