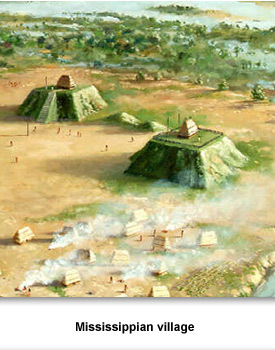 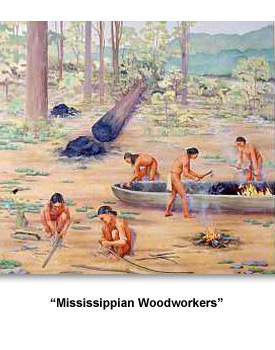 The Mississippian culture was the largest and most complex society that lived in prehistoric Tennessee. Mississippian people lived in and around the state from about 1,000 A.D. to 1,500 A.D.
This group is also referred to as the mound builders, because they built many large ceremonial mounds within fortified towns. However, archaeologists refer to them as Mississippian because the culture was located in the Mississippi River valley.
The Mississippian people lived throughout the southeast from as far north as Illinois to as far south as southern Florida, and from North Carolina to the Mississippi River.
Their culture is marked by several distinct characteristics. The most widely known is the mounds they left behind. These mounds can be found all over the region. The largest sites are in Cahokia, Illinois; Moundville, Alabama; and Etowah, Georgia.

Tennessee also has many Mississippian mound sites. Mound Bottom in Middle Tennessee and Shiloh mounds in West Tennessee are just two mound sites protected for their archaeological value.
The Mississippian people had a highly developed society. They had a complex system of ceremonies, and crafted beautiful works of art to be used in these ceremonies. They were excellent pottery artists. The Mississippians left behind thousands of interesting artifacts that tell us about their rich culture in Tennessee.