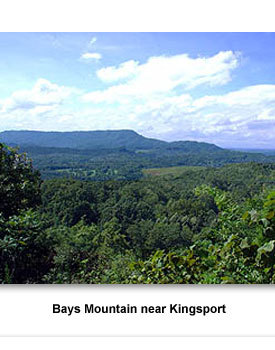 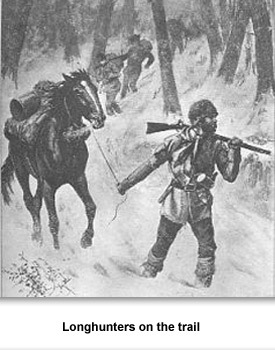 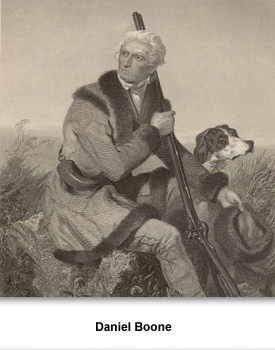 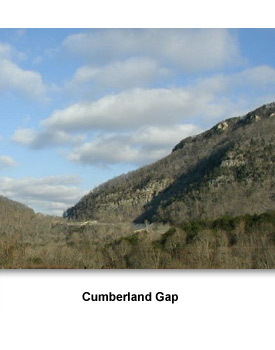 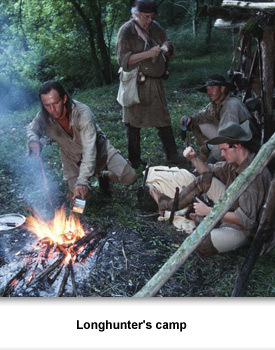 Who Came to Tennessee

The first colonial people to come into what is now Tennessee were longhunters.  They came in parties of two or three men looking for animals to kill.

They were called longhunters because they would stay gone for months, collecting animal skins, and drying meat to sell back in the eastern colonies or down the Mississippi River to New Orleans.  Read more about hunting.

Merchants returning from trade trips to the Overhill Cherokee tribes brought back news about the large number of wild animals in the area.

In 1748 and again in 1750, Thomas Walker crossed the mountains into the Holston River valley.  He explored and told others about the Cumberland Gap which allowed an easier access to the western lands.

In 1761, Elisha Walden set up camp in Virginia and went to the Clinch and Powell river valleys. In 1764, Daniel Boone and Richard Callaway were exploring the Holston valley for land speculator Richard Henderson. By 1769 James Smith, Kasper Mansker, Isaac and Abraham Bledsoe, and others were hunting in Middle Tennessee.

As these longhunters returned to the colonies, they told people about the abundant land west of the Appalachian Mountain chain.  People, starting with William Bean in 1769, began to move to Tennessee.

Most of the people who first came to the area later known as Tennessee were originally from three states: North Carolina, Virginia, and Pennsylvania. Some of these settlers brought slaves with them. A few free African Americans also settled in the state.  Read about a free black man who moved to Tennessee.

Many traveled as families or even as communities. But even with families and friends, the settlers were taking a big risk. They were moving to a land they didn’t know.

These early adventurous pioneers were sometimes called the Overmountain people because they came over the Appalachian Mountains to get to Tennessee. They followed old Indian hunting trails and muddy, rut-filled roads through the mountains and along rivers.

Most of the first settlers came to Tennessee using only pack animals or Conestoga wagons to carry all their possessions. These might include a few iron utensils, extra lead and gun powder, and tools, but usually not furniture.  Read more about Conestoga wagons.
In addition to building a cabin, they would also have to build a bed, table and chairs. Some of the most important items the settlers would bring with them were seeds. Planting seeds to grow food was one of the first activities the settlers would do.
After first settling in the eastern part of the state, some settlers used flatboats to float down the river to settlements further west.

The best known of these is the Donelson party who traveled in a flotilla of flatboats commanded by John Donelson in 1779/1780. They floated down the Tennessee River in East Tennessee, then up the Cumberland River to join a party of men led by James Robertson.  There they established Fort Nashborough, later the city of Nashville.