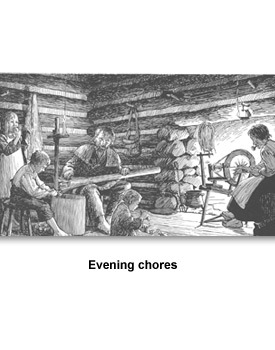 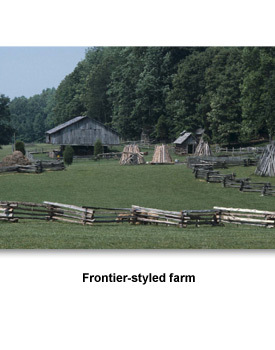 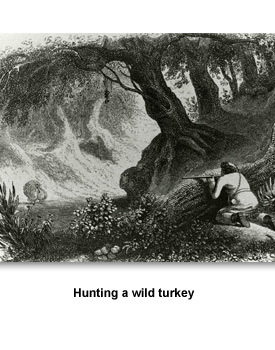 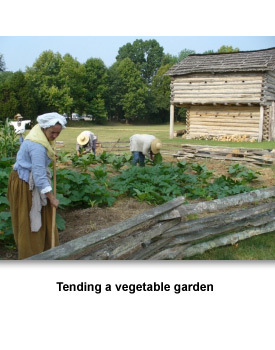 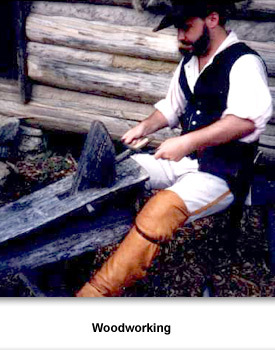 Work on the frontier began before daylight and was finished at night by the light of the fireplace.
Early frontier settlers were faced with a variety of daily tasks. Generally, men and women were expected to do different types of work, but sometimes the entire family had to help with the tasks involved in growing or raising food.
More often than not, men farmed and conducted other activities outside the home. Most women focused on chores in and around the house, especially those needed to take care of the family.
If a family owned a slave, family members might have to work less, but most families worked the field beside the slave. Only a handful of people owned large numbers of slaves whose labor might have reduced the duties of their owners.
Children as young as three or four were expected to help by gathering kindling, collecting eggs, emptying chamber pots, fetching water, and removing ashes from the fireplace. By age 12, children did such adult chores as grinding grain, sewing, hunting small animals, milking cows, helping with crops, and chopping wood.
Farmers trusted their almanacs for information on weather, advice, and, as unbelievable as it might seem today, astrology. Most people believed that cycles of growth were governed by the phases of the moon and positions of the planet. For example, farmers might avoid slaughtering hogs in a “waning moon” because they believed the pork would shrink.
While some work was necessary for family survival, other tasks were geared for profit. Gardening provided a family's food supply, but in general, farming was intended to make money by selling or swapping the extra produce. Settlers raised cows, pigs, and sheep not only to eat but also to sell.
Other commercial enterprises—like whiskey-making or blacksmithing—were undertaken as well. Not all settlers were successful at these ventures, but many were.