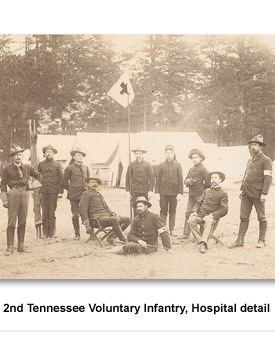 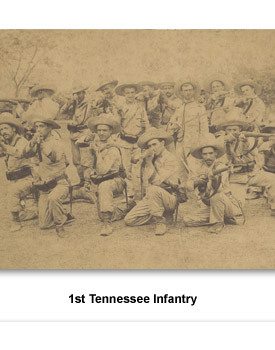 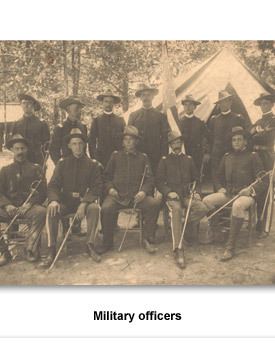 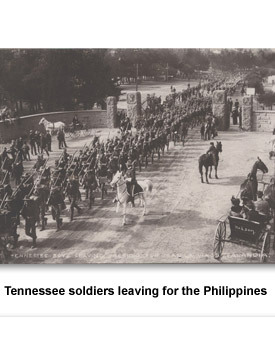 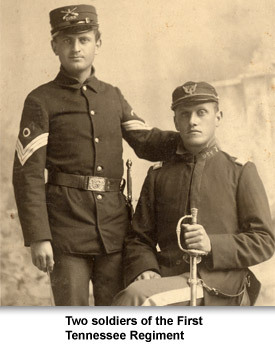 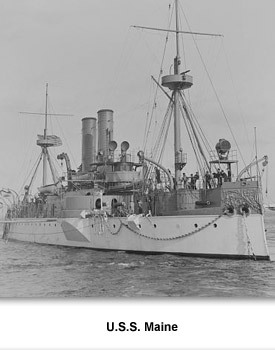 After the U.S.S. Maine mysteriously exploded off the coast of Cuba in February 1898, the United States demanded that Spain grant independence to Cuba.

When Spain refused, the U.S. declared war on Spain in April of that year. The U.S. government had decided that Spain had caused the destruction of the U.S.S. Maine and the death of 266 American sailors.

American newspapers called for a military response to the Maine destruction. They also ran articles detailing atrocities (cruel acts) committed by the Spanish in Cuba. Such reports were untrue for the most part. Newspapers of this time tended to feature scandals, sensational stories in an effort to sell more newspapers and make more money.

With emotions so fired up, Tennesseans and other Americans were anxious to volunteer to fight. In total, Middle and East Tennessee contributed four regiments—more than 4,000 soldiers—to the war which was fought in Cuba, Guam, and the Philippines.

National newspapers praised the patriotism of Tennessee’s soldiers, citing that

Tennessee has maintained her reputation as a volunteer state. The President called for a fraction more than three thousand men to enlist in the war against Spain, for two years, there are now thirty nine hundred in the camps at Nashville, to be mustered into the National Service…If the President’s call had been for six instead of three regiments, they would have all been in the field now.

Of the volunteers recruited in Nashville in April and May of 1898, the First Regiment was the only regiment to see action in the Philippines, while the Fourth was sent to Cuba as a stabilizing force after the war.

Tennesseans were members of such famous groups as the “Buffalo Soldiers” and the “Rough Riders.” Cordell Hull, who later served as U.S. secretary of state, raised a company of men from the Upper Cumberland section of the state. Dig Deeper: Why were the names Buffalo Soldiers and Rough Riders used to describe army units?

Several African Americans served in segregated units during the war. The U.S. government mistakenly thought black soldiers would be resistant or immune to tropical diseases, so they had organized several all-black units. One of these units was commanded by Colonel Lawrence Tyson of Knoxville who later served as a World War I general and U.S. senator. Tyson was white; the U.S. Army still did not allow blacks to command units.

One Tennessean, Alfred Ray of Jonesborough, served with the black Tenth U.S. Cavalry, also known as the Buffalo Soldiers. At the Battle of San Juan Hill in July, Ray and other black soldiers continued the attack after their white officers had been either killed or wounded. Under fierce gunfire, Ray planted the first American flag on the hill. He was promoted for his actions.

Commander Washburn Maynard, a Knoxville native, is credited with firing the first shot of the war on April 22, 1898 from the gunboat Nashville.

Despite these men, most Tennesseans did not see action during the war. The First Tennessee was mustered out in November of that year, the last Tennessee unit to leave the service. It was also the most decorated of all state volunteer regiments.

For more information about the war, click here and here.