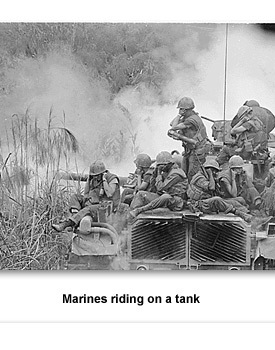 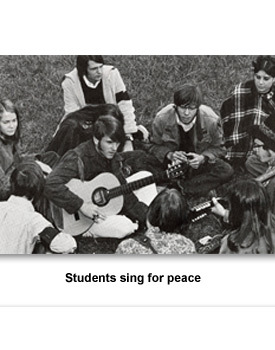 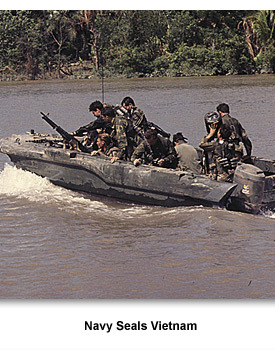 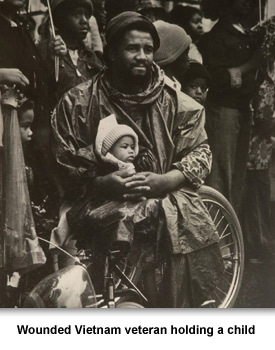 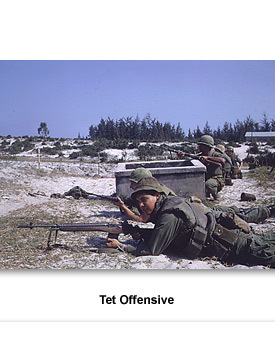 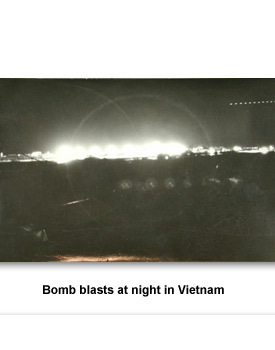 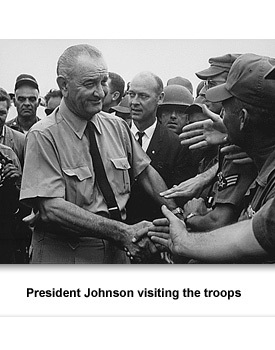 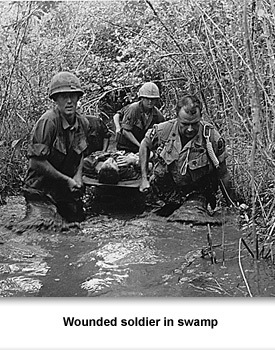 The Vietnam War also resulted from the Cold War. Vietnam had been a colony of France before World War II. After the war, Vietnamese forces fought and defeated the French.
At the Geneva peace talks in 1954, the country was divided into two areas with an election scheduled for 1956 to unite the country under one leader.  Governments were formed in both the northern and southern parts of the country, and the election never happened.

During this time, President Dwight Eisenhower and other U.S. leaders believed in the "domino theory."  They thought that a victory by Communists in one southeast Asian country would lead to communistic governments in other nearby countries.  They believed that they had to stop communism .

The government of North Vietnam decided to try to take over the government in South Vietnam. In 1960 they organized a group of fighters to infiltrate the south (although many of them already lived in the south). This group was called the National Liberation Front. The U.S. called them the “Viet Cong.”
President John F. Kennedy sent 16,000 military advisors into South Vietnam to assist local military forces. After Lyndon Johnson became president, he decided that South Vietnam needed more than advisors; they needed American fighting troops.  In 1965 President Johnson sent in troops.
As the U.S. generals needed more and more troops in Vietnam, there were not enough volunteers joining the Army.  A draft was in operation at this time. If you were drafted you had to join the army whether you wanted to or not.  And most young men who entered the army were sent to Vietnam.
Read more about the draft in 1969.
The draft was unpopular among the young. Many of them did not understand why the U.S. was fighting in the war. College campuses became the centers of protests. Large marches were held in Washington D.C. and other cities. Sometimes the protests turned violent.
Other Americans believed that when the country was at war, all Americans should support the fighting men and women.  This led to disagreements between people, and sometimes even families.  People in Tennessee also disagreed about the war.

Fighting increased each year until 1968, the year of the Tet Offensive.  While the Viet Cong did not win the offensive, the sight of American troops dying under fire on television news broadcasts began to turn the American people against the war.  More and more troops were needed, and millions of dollars were spent on the war.
Because of the large number of people dissatisfied with the war, President Johnson announced that he would not run for reelection. Negotiations to end the war began in Paris in 1968. The new president, Richard Nixon , continued the negotiations and Johnson’s policy of trying to make the South Vietnamese army strong enough to fight on its own with less U.S. troop involvement.
A peace treaty was finally signed in January 1973. But even as U.S. forces began to withdraw in 1975, North Vietnamese forces made a final military push. They captured the South Vietnamese capital of Saigon on April 30, 1973, and the government of South Vietnam collapsed. The war was over.
As in Korea, Tennessee benefited from federal war spending at its military-related institutions. Thousands of young Tennesseans were drafted or volunteered for service, and 1,219 Tennesseans were killed. There were four Medal of Honor recipients from the state:  James Gardiner, Don Jenkins, David Robert Ray, Walter Keith Singleton.  Another Tennessean, Navy Captain William Lawrence was shot down over North Vietnam and spent six years in a prisoner-of-war camp.  To read more about Lawrence, click here.
The legacy of the Vietnam War was far reaching. Ever since the New Deal and World War II, the American people thought the government was always working for the public good. After the Vietnam War, people didn’t have the same trust in their government. Read more about the legacy of the war.
For more information about the Vietnam War, click here.