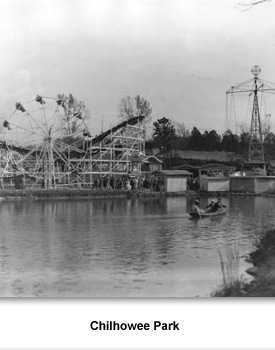 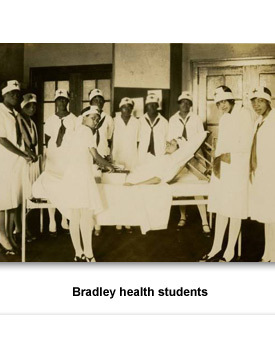 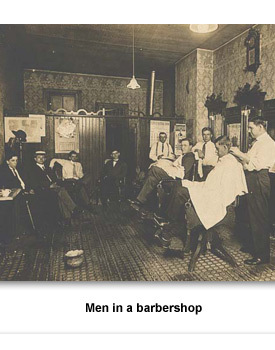 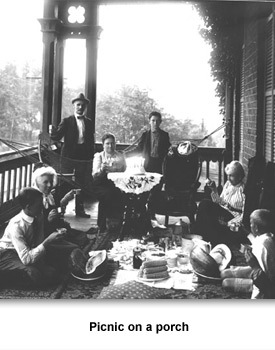 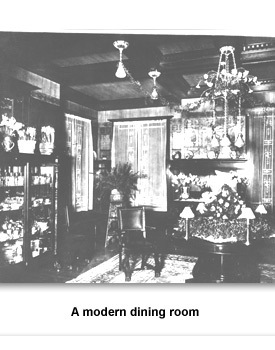 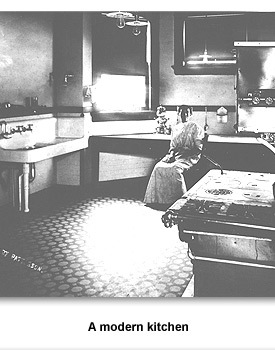 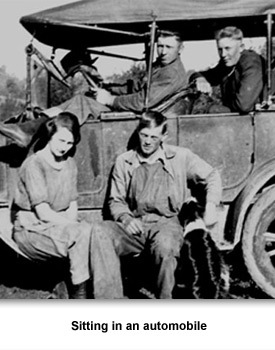 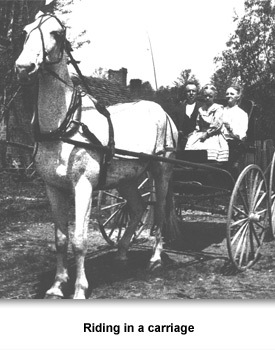 Everyday life changed dramatically during the time period from 1875 to 1930. From the way people dressed, to how they traveled, cooked their meals, stayed in touch with their families, and took care of their health, people lived drastically different lives in the 1920s than they did in the 1870s.
Fashions
Women in 1875 wore long dresses that would not have been out of place 50 years earlier. By 1930 they were wearing shorter dresses, such as shifts, that are similar to what is worn today.

Clothing in 1875 would have been made at home or by dressmakers. By the end of the era, department stores with ready-to-wear dresses were located in all the major Tennessee cities.
Dig Deeper: The new fashions of the 1900s required new underwear. What was it?
Early in the era, shoes were often ill-fitted. Many people, especially men, only had one pair that lasted for several years. In 1917, U.S. Rubber made the first sneaker, called Keds. Why “sneakers”? Because the soles were rubber which made them quiet and allowed a person to “sneak” around. Other shoes at this time often squeaked when people walked.
Personal Hygiene
People in the 1800s sometimes had interesting ideas about health and hygiene.  For example experts recommended bathing in tepid water--neither hot nor cold.

They knew more about disease and cleanliness than people who lived 100 years before them. They understood that people needed to eat wholesome foods in order to remain healthy. And they were much more careful about personal hygiene—bathing and brushing teeth. But we would still find some of their beliefs strange today.

To read more about 1870s practices on health and hygiene, click here.
Travel
From the horse and wagon in 1875 to automobiles in the 1920s, transportation changed greatly during this era. The introduction of the Model T in early 1900s enabled Tennesseans to buy a relative inexpensive but good automobile.
Air travel began with the Wright Brothers’ first flight in 1903. It only stayed in the air for 120 feet, and there was no room for passengers or cargo.  But the technology continued to improve. World War I saw widespread use of airplanes as observation planes and fighters. After the war, daredevil pilots started flying stunt planes at county fairs and other locations. People would come from miles around to watch the stunts.
In 1927, Charles Lindbergh flew an airplane from New York to Paris, France. It was the first time anyone had flown across the ocean. People in the U.S. waited with anticipation to hear that he had landed safely. By the late 1930s airplanes were carrying the mail and some passengers.
Technologies
Technological advances made dramatic chenges in lives from the beginning of the era to the end.

In 1875 people used gas to light their homes, and coal or gas to heat it. By 1930, electrical lines were present all around the cities, lighting homes, running appliances, and giving people heat.
At the beginning of the era, if you wanted to tell your sister in another state that you had a new baby, you wrote her a letter. At the end of the era, you could pick up the telephone and call her long distance to tell her the news.
Technological advances were coming fast and furious. People started working in jobs, such as electrical engineering, that hadn’t existed in 1875. Life seemed to be improving all the time.
There were new things to buy, new places to shop, new ways to travel, and new ways to have fun. And although poor people might not fully participate in this new economy, they still occasionally enjoyed some of its benefits.
Play a game: Match the 1870s saying to what it means today.

"Powerful" It's been a powerful hot day.
"No-account" Both her sons are no-account.
"Limb" She fell and hurt her limb.
"Hornswoggle" John is going to hornswoggle his employer.
"Set store by" He set store by his father.
"Right smart" There's been a right smart of snow this year.
"Cotton to" Mary took a cotton to Jack.
"Absquatulate" He absquatulated with all the money.
"Quilting Bee" Mother went to Aunt Sally's for a quilting bee.
"Vamoose" You better vamoose out of here; the teacher's coming.
large amount or quantity
extreme, great
social event where women make a quilt
to take a liking to
to cheat
worthless
to leave, to disappear
to value, appreciate
leave quickly
socially polite word for leg


Confronting the Modern Era >>  Life in Tennessee >>  How They Lived >>