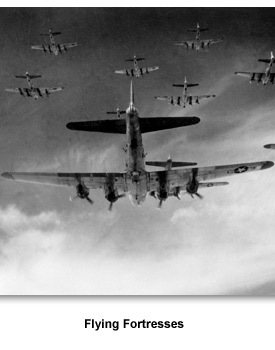 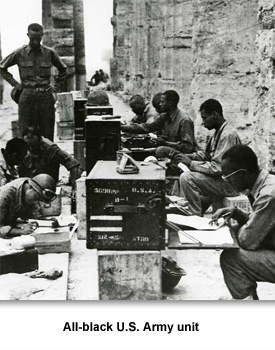 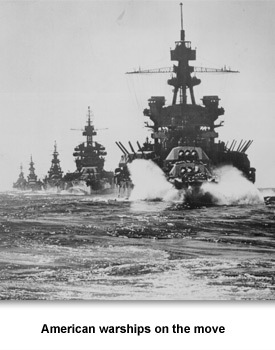 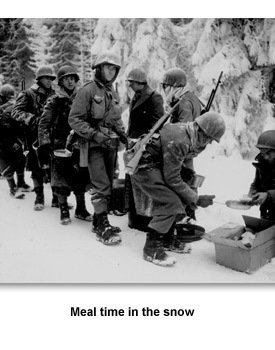 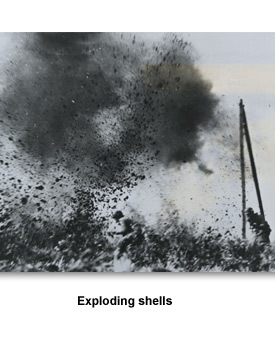 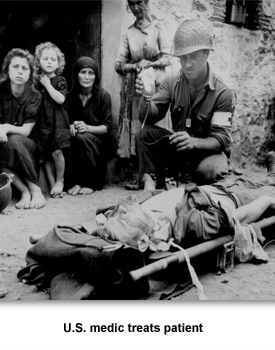 During World War II, most soldiers were never exposed to direct combat.  For every B-17 or B-24 bomber with a flying crew of ten men, there were 20 to 25 men supporting them.

Other uniformed men saw combat within the first few months of war.  Sailors, deployed on aircraft carriers that had not been at Pearl Harbor, fought Japanese naval and air forces in the Battle of Coral Sea in May 1942.  The next month, these carriers won a decisive victory at the Battle of Midway.
After basic training, some soldiers were sent overseas to fight. They were put on transport ships, often sleeping six or seven bunks high with barely enough room to roll over. Usually they were sent first to Great Britain and later to North Africa where American troops first saw combat in late 1942.
In Europe, American bombers begin bombing raids over Germany in August 1942. But they incurred heavy losses at first.
Combat was often personal, fought building by building, foot by foot. Soldiers had to learn to deal with the stress and the fear of dying. Most did by not thinking about it—just assuming they would make it through. But when they lost a friend or a member of their unit, the reality of what they were doing would come back.
As one veteran said, “I was in combat for six weeks, but I could remember every hour, every minute of the whole 46 days.”

African Americans were still segregated by units, mess halls, barracks, and bars both in the United States and overseas. There were nine black field artillery battalions and a half dozen tank battalions. By the end of the war, many white commanders felt that black troops could be assigned to fight alongside whites. President Harry Truman integrated the armed forces in 1948.

Read about some Tennesseans who fought in the war

Read about prisoners of war during World War II.