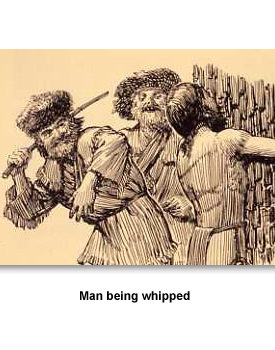 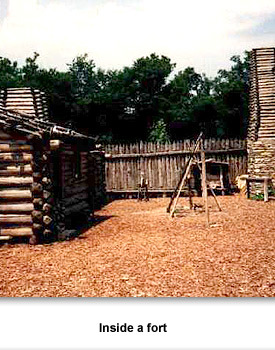 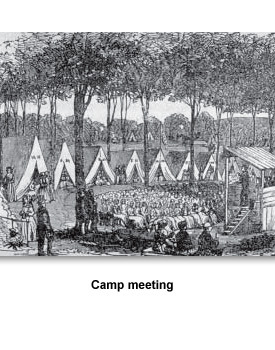 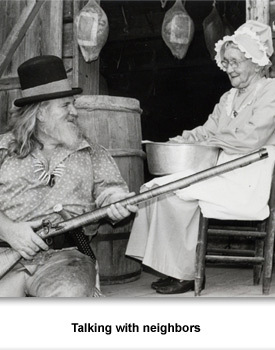 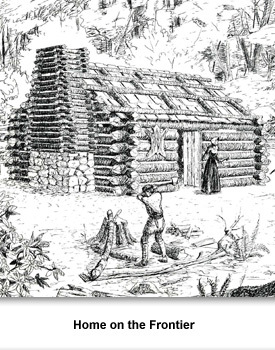 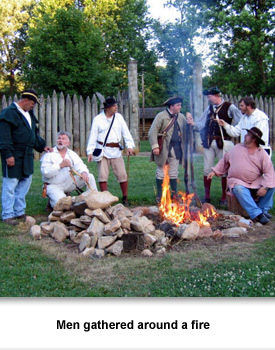 Frontier homes were where settlers slept, ate, played, worked, gave birth, and died.
While their homes were simple, everyday life was not.  Food had to be grown or hunted. Clothes were made from flax, cotton, or wool that had to be spun, dyed, and woven. Soap was made from ashes and fats. Candles were formed from tallow or beeswax. Eating utensils, furniture, and even the roof over their heads were all made by the pioneers.
These large families were usually crowded together in the same room. If they had a loft, the parents slept downstairs with a baby or young child while the children slept in the loft, with several children in the same bed. They were usually up before dawn, and went to bed shortly after dark.
Everything had to be done by hand—chopping trees, hauling wood, digging out rocks, hoeing weeds, picking cotton, harvesting vegetables, mowing hay, husking corn, milking cows, hauling water, churning butter, and preparing foods.
Women did chores in the house, kitchen, farmyard, and garden. Men worked in the farmyards, fields, barns, pastures and woodlands. Children more than three years old were expected to help with chores.
Hygiene
Most people in these times considered washing their face and hands as sufficient daily hygiene. They changed their clothes once a week, but probably only cleaned their entire body once or twice a year. Bathing involved standing in a tub of water and sponging off with a rag.
Frontier Tennesseans did know that food caused tooth decay. They attempted to clean their teeth using twigs or roots. The most popular were twigs from sweet gum trees or sassafras root. Even so, many people had problems with tooth decay.
Ideas about hygiene were beginning to change. By 1821, books were recommending cleanliness as “becoming in…society, but absolutely necessary for…good health.”
Tennesseans lived in a world that was full of dirt, insects, and really strong smells. With no deodorant and little bathing, most people’s clothing, especially in the summer, was stiff with dirt and sweat.
Houses were full of flies, and bedding sometimes had fleas and bed bugs. Chamber pots were used at night for toilets, and then the contents were thrown outside in the morning. Some farms had an outdoor privy; other families just went outside to an available piece of the woods.
Life was difficult, and medical knowledge and care were very primitive. People regularly became ill and died.
Early deaths meant that many widows and widowers had to find places in the households of their children or married brothers and sisters. In some cases, widows moved back home with their parents. Life on the frontier was hard enough for a family. Not many people attempted to live all alone.