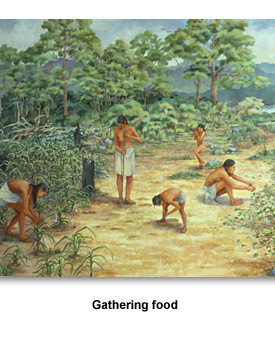 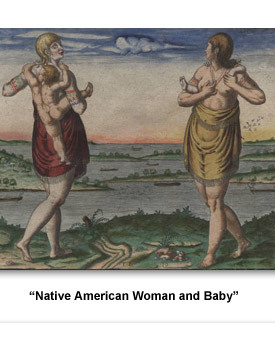 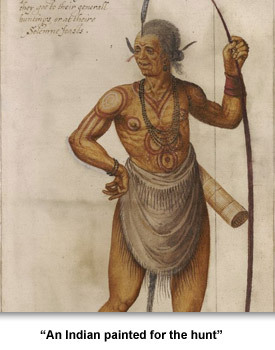 Men and women had different jobs that they were expected to carry out.  Providing food, clothing, protection for their tribe and raising children were very important duties.
Men
Men hunted, fished, made weapons, built and repaired buildings, and made tools.  They cleared land for farming, although women did the planting and harvesting.
They acted as politicians, and met in councils to discuss tribal business. More importantly to their tribe, men protected the village and fought the wars.
Men used the bow and arrow to hunt for large animals. Even young boys used blow darts to bring down smaller animals. Instead of trying to kill an animal from a distance, Indians got as close to the animal as they could.
Knowledge of animal habits was important for a hunter to be successful.  For example, the hunter would want to know where did the animals get water and where do herds of buffalo graze.
Indians would also need to be able to recognize tracks or other signs from different animals so they would know which animals to track.   Songs and prayers for a successful hunt were necessary before every hunt. Many of these were made up on the spot, but some were used repeatedly. To see animal tracks drawings, click here.
After contact with Europeans, Indians wanted guns for hunting and protection. By the mid-18th century, European-made guns replaced the bow and arrow in both hunting and warfare, allowing for greater accuracy at longer distances.
Tennessee Indians also had several methods for fishing, including traps, spears, trot lines, and even poisoning.  One European explorer described the use of dams to capture fish.
Men’s work, though hard, still allowed leisure time. They would play games like stickball and do other recreational activities.
Women
Women’s work was continual. While men prepared farm land, women were responsible for planting and harvesting crops. Women from related households farmed this land together.
Henry Timberlake, while visiting Cherokee villages in Tennessee in 1762, described hundreds of acres of fields, gardens and orchards around each village. The land is “so remarkably fertile that the women alone do all the laborious tasks of agriculture,” he said. Dig Deeper: What did Timberlake say that was wrong?
Women also gathered food year round.  Timberlake said this included peas, beans, potatoes, cabbages, Indian corn, pumpkins, melons, and tobacco. This increased the variety of food available, and helped to make up for periods when hunting was difficult.
Women were also responsible for preparing, preserving, and cooking the food. They gathered firewood for cooking from as far away as several miles. Women also made clothing. They also cured and sewed hides used for clothing and bedding.
Women made trade goods. This included clothing, hand-woven sashes and belts, baskets, pottery, and decorative bead and quill work. Women also cared for young children, tended the sick and elderly, and maintained their households.