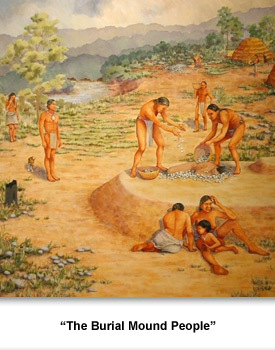 In all, the Woodland Indians had a very rich culture centered on these new innovations in pottery, burial customs, agriculture, trade, hunting and warfare. They began to develop more complex societies.
There was a highly developed culture to the north of Tennessee called the Hopewell Indians. The Hopewell Indians developed vast trade networks across the continent. This allowed the Woodland Indians in Tennessee access to pipestone from Minnesota, obsidian from the Rocky Mountains, and sea shells from the Gulf Coast.
Because of these cultural developments, the Woodland Indians population grew much more than their Archaic ancestors. During their time in Tennessee, these Indians spread throughout the state. They lived in the major river valleys of Tennessee and along smaller rivers and creeks.
One archaeologist described the Woodland people as “filling in” the land throughout the state. As a result of this population boom there are more Woodland archaeological sites in the state than Archaic sites.