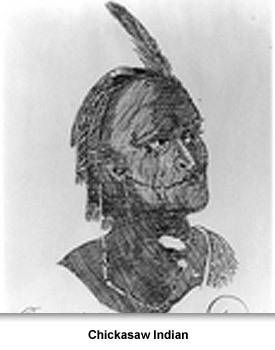 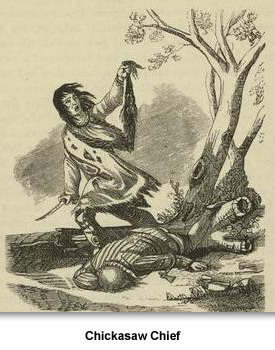 Contact with British and French explorers had a big impact on Indian life in the early historical period, but so did relations with other tribes.
Trade between the Chickasaw and English traders was first established in the 17th century. The Chickasaw were politically important to both British and French.
In exchange for European trade goods and military support, the Chickasaw raided other tribes for slaves in the early 1700s. They then sold these slaves to the British. The Chickasaw were in near constant warfare with the Choctaw and other groups during this time.
In 1702, a French mission witnessed Chickasaw raiding into Choctaw territory for captives to be sold as slaves in exchange for English guns and other trade goods. The same mission reported that the English slave traders “sat in on a council in the Chickasaw villages the [the French] attended.”
By the 1760s, the Chickasaw had lost their advantage over other tribes as European trade brought firearms to other tribes.  Later in the 1700s, the Chickasaw lost power and influence as Europeans dealt with other tribes such as the Cherokees. The Chickasaw were largely left alone until 1801 when the first United States agent arrived.
Constant warfare probably contributed to the decline of the Chickasaw. They had made so many enemies that even going on a hunting trip was risky.  The Choctaw had begun to block off the overland trade routes to Charleston, further threatening the supply of English goods to the Chickasaw.
For more information about the Chickasaw in Tennessee, click here.