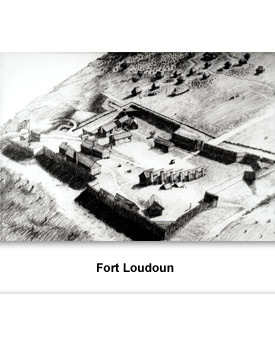 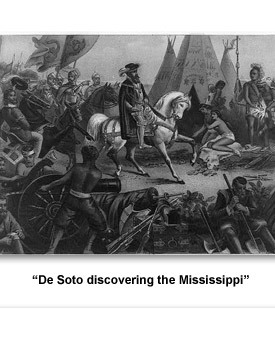 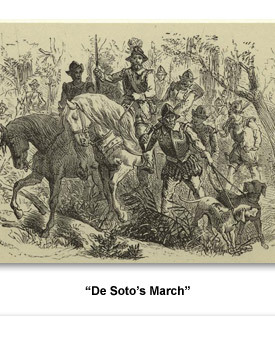 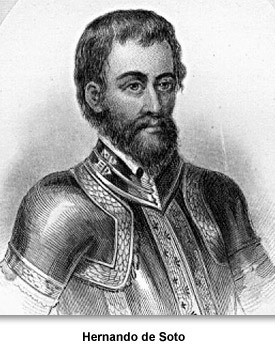 The first European to enter Tennessee was Hernando de Soto in 1540. His expedition of 700 Spaniards and a number of slaves crossed into Tennessee in mid-May.
In Tennessee, they encountered a Mississippian town called Chiaha, near present day Dandridge, Tennessee. The people of Chiaha welcomed de Soto’s men and gave them food.
When de Soto prepared to leave, he demanded that they give him 30 women to take with him. The Chiahans refused. De Soto trapped them on a nearby island when they tried to flee their town. They finally agreed to give de Soto several men to help carry the Europeans’ supplies, but no women.
De Soto continued on to a town called Coste.  De Soto’s men raided Coste for food. They took the chief hostage to prevent the Indians from attacking back. The Europeans left soon afterwards and moved out of Tennessee in mid-July.
Another Spanish explorer, Juan Pardo, brought an expedition to the eastern part of Tennessee in 1566-1567. Like de Soto, he was looking for gold, which he did not find. This apparently discouraged the Spanish from sending other groups into the area.
The first European to establish a permanent presence in Tennessee was a Frenchman named Robert Cavelier de la Salle. While exploring the Mississippi River, he established Fort Prudhomme in West Tennessee in 1682.
In 1739, the French established Fort Assumption in what is today Memphis. The French, under the leadership of Bienville, tried to take West Tennessee from the Chickasaws. Bienville’s mission ended in failure. The French left after only a few months.
Later French hunters expanded along the Cumberland River and eventually started hunting at a salt springs they called French Lick.  This area is now located in present day Nashville. The French fur trade with the Shawnees thrived into the 1700s.
The British began sending explorers into Tennessee in 1673, much later than the Spanish and French. Instead of using the Mississippi River to get to West Tennessee like the French did, they crossed over the Appalachian Mountains into East Tennessee.
British explorer Thomas Walker was sent by a private land company in 1749. It is from Walker that we now have the Cumberland Gap, the Cumberland Plateau and the Cumberland River. He named all these geographical features he encountered after the Duke of Cumberland.
The first British fort was Fort Loudoun.  Built between 1756 and 1757, Fort Loudoun was meant to improve relationships between the British and the Cherokees during the French and Indian War. The good relationship did not last, however. In 1760, the Cherokees attacked the fort. The British surrendered, and the survivors were either captured or killed.