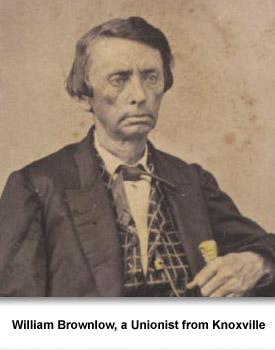 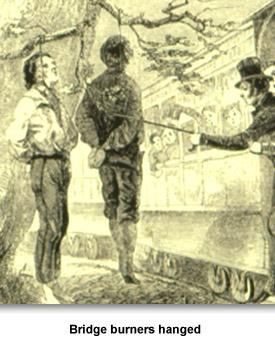 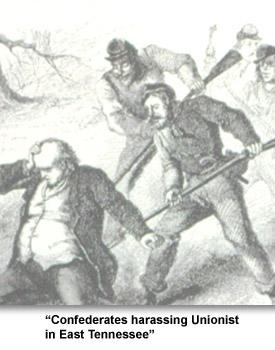 Tennessee remained divided even after the state seceded or left the Union.

Many people in East Tennessee remained loyal to the Union.  Support for the Confederacy was strong in Middle and West Tennessee.  Many slaves hoped that a Union victory would bring them freedom.

East Tennessee’s loyalty to the Union came from its terrain and traditions.  Because of the soil in that part of the state, East Tennessee landholders did not grow crops like cotton and tobacco that were labor-intensive.  Therefore they did not need slaves as much as landholders in other parts of the state.

Greeneville citizens presented petitions to the Constitutional Convention in 1833/34 asking that slavery be outlawed in the state.

After Tennessee joined the Confederacy, officials from Scott County announced they were seceding from the state to remain in the Union.

Meetings regarding the formation of an independent state that would rejoin the Union were held in Greeneville, Knoxville, and Kingston.  More than 400 men attended the Greeneville Convention that lasted from June 17–20, 1861.

At first Tennessee Governor Isham Harris followed a policy of conciliation for the state’s Union supporters.   Then East Tennessee voters elected U.S. congressmen in the election of August 1861, despite the governor urging them to only vote for Confederate candidates.  This upset Harris, and the state Confederate government began to suppress Union sentiment by arresting leaders and demanding loyalty oaths.  William Brownlow, publisher of the Knoxville Whig newspaper, was arrested for treason, but later allowed to go north.

Carter and his band managed to burn five of the bridges, but federal troops failed to arrive.  Confederate officials arrested hundreds of suspects.  Five of the bridge burners were hanged with two of them left hanging as a warning for others.

During this period of Confederate rule, Union sympathizers could be imprisoned for their beliefs.  Many of them fled the state or went into hiding to avoid jail.  Others went north to Kentucky and other states to join the Union Army.