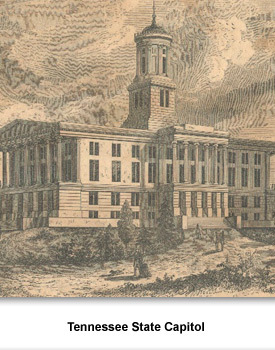 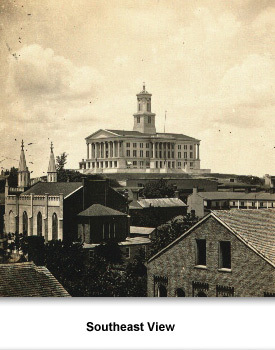 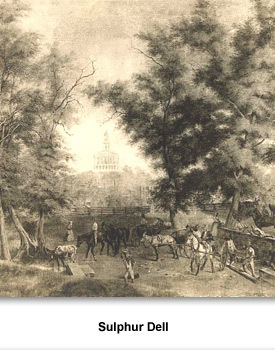 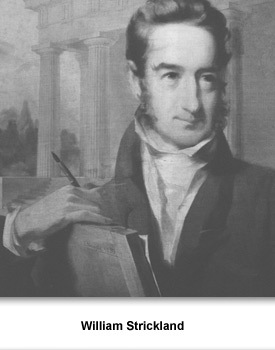 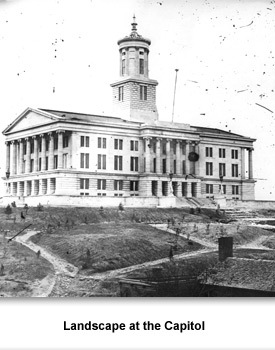 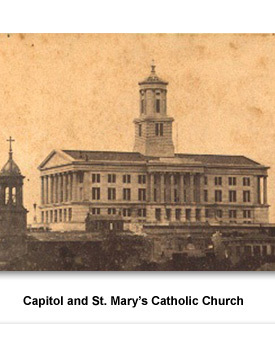 During the early 1800s the Tennessee state government faced a problem. The state had not chosen a capital city or built a capitol building. Governor Jimmie Jones and others wanted a permanent site.
The legislature had met in Knoxville, Kingston, Murfreesboro, and Nashville in a variety of makeshift buildings. For example, in 1827, the state legislature had its session at Nashville’s Davidson County Courthouse.

Dig Deeper:  Why was Kingston the state capital?
Different cities and towns competed to be named the state capital. The city of Nashville bought Campbell’s Hill, one of the highest sites in the downtown area. The mayor and other officials planned to give this land to the state for the new state capitol building. The legislature finally selected Nashville as the capital city in 1843.
The state selected architect William Strickland to design the new capitol building. Strickland was a very famous architect from Philadelphia. He learned his trade under the instruction of Benjamin Henry Latrobe, architect of the United States Capitol. Strickland’s design for the new capitol was in the popular Greek Revival-style, that features porches with columns.
Construction on the new state capitol building began in 1845 and work continued until 1859. Many different people worked on the project. Samuel D. Morgan was the longest serving member of the capitol Board of Commissioners. He helped supervise the building construction and finances.

Dig Deeper: Who is buried at the Tennessee State Capitol?
The building was made primarily of limestone taken from a Nashville stone quarry down the hill from the building. Many people were needed to prepare the building site and materials and transport and set the stone blocks and pillars. Workers included skilled stone carvers and masons, prisoners from the state penitentiary, and slaves.
Originally, all three branches of the Tennessee government met in the new capitol building. The Tennessee Supreme Court’s chamber was located on the first floor. The governor served as the head of the executive branch and had an office on the first floor. The legislative branch including the Tennessee House of Representatives and Senate had rooms located on the second floor.
For more information on the State Capitol, click here:


Age of Jackson >>  Tennessee's People >>  How They Worked >>  Building a Capitol